Gandhi and Slow Reading: A Look at Gandhi’s Philosophy of Reading 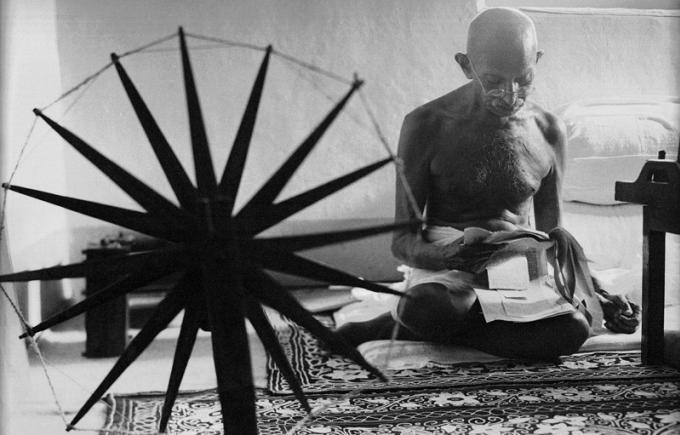 Gandhi’s practices of silence, slow reading, fasting, walking and spinning were integral to his self-search.

"There is more to life than increasing its speed"-Gandhi

Isabel Hofmeyr, Professor of African Literature, University of the Witwatersrand

Here Hofmeyr analyzes the act of slow, deliberate reading and thoughtful reflection that Gandhi cultivated and adopted as key conditions toward the realization of truth and self-rule. 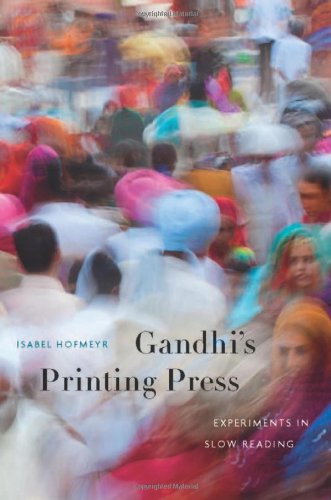 “In our own frantic age, with online reading becoming ever more fragmentary, Gandhi’s ideas have deep resonances. As all aspects of life accelerate, we have to seek out the pauses that provide an opportunity for reflection and contemplation. Taking Gandhi’s advice, we can use reading itself as a mode of slowing down the agitated rhythms that drive contemporary life.”

“During his South African years (1893-1914), Mohandas Gandhi started a printing press and a newspaper, Indian Opinion. One of the world’s great intellectual archives, Indian Opinion constitutes an experiment with reading and writing that fed into Gandhi’s ideas on satyagraha or “passive resistance.”

Writing in an age of vertiginous acceleration via telegraph, train and steamship, Gandhi grappled with an industrializing information order in which readers were bombarded with ever more reading matter. In this context, Gandhi saw reading and writing as ways of managing the tempos of the industrial pressure. Such strategies questioned the relationship of speed with efficiency, a link that lay at the heart of satyagraha and its critiques of industrial modernity.

Gandhi’s ideas on reading and writing hence have much to say to our frantic, information-smothered lives. In a recent book, Gandhi’s Printing Press: Experiments in Slow Reading (Harvard University Press, 2013), I explored these themes of speed and sovereignty, satyagraha and reading.

Satyagraha is generally understood as a political practice of non-violence, civil disobedience or non-co-operation. But it is equally a mode of building swaraj or “self-rule,” which for Gandhi meant literally that, namely, rule of the self. In his thinking, such self-rule or independence cannot be conferred on a person; it has to be built up painstakingly by each individual.

Satyagraha then is a practice of sovereignty rooted in the individual, rather than an abstraction like the nation state. As a concrete practice, satyagraha best inheres in activities which proceed at the pace of the body (like spinning and fasting) and which disrupt instrumental logic of means and ends. Through such practices, ethical values accrete in the individual and form the basis of self-rule, creating independence one person at a time.

Reading is of course a practice that can only proceed at the pace of the body. If we are to read thoughtfully, we cannot speed up the pace at which we read and we cannot outsource the activity to someone else. In a Gandhian world, reading could become one way of pausing industrial speed to create small moments of intellectual independence. Reading may happen within the world of industrial time, but didn’t need to be entirely driven by its logics. This focus on bodily rhythm as a way of interrupting industrial tempos became central to his world-famous critiques of modernity, which questioned the equation of speed with efficiency and technology with progress.

One of Gandhi’s first experiments with these ideas utilized a printing press and a newspaper set up in Durban, an Indian Ocean port city in the colony of Natal (in present day South Africa). The International Printing Press (IPP) of which Gandhi was the sometime proprietor was established in 1898, initially as a jobbing press to serve the Indian community in Natal. In 1903, the IPP began printing the newspaper Indian Opinion. The paper appeared weekly and was initially printed in four languages (English, Gujarati, Hindi and Tamil), although the latter two soon fell away.

Before long the paper and the press experienced major financial difficulty, and in early October 1904 Gandhi (then based in Johannesburg) took the overnight train to Durban to investigate. Famously, his friend Henry Polak gave him a copy of Ruskin’s Unto this Last, a book that persuaded Gandhi to establish his first ashram, Phoenix, 14 miles north of Durban. By December 1904, the paper and press has been moved to Phoenix where both played an important role in dramatizing the new kind of community that Gandhi sought to build as different religion, caste groups, races and genders interacted in Phoenix and the press itself.

The paper appeared weekly and functioned as a key component in Gandhi’s campaigns in South Africa. In terms of circulation figures, these ranged (according to Gandhi’s estimates) from 800 to 3,500, with an average of 1,200 to 1,500 (as well as a secondary readership of borrowers and non-literates).

In these printing and newspaper operations, Gandhi sought to propagate practices of slow reading and writing. He favored hand-printing wherever possible and, as the newspaper continued, he scaled back on advertisements with a view to withdrawing the paper from the dictates of the market.

Gandhi (ever an alchemist of the ordinary) took the basic elements of the newspaper, designed to promote hasty reading and sought to turn them against themselves. With its telegraphic headlines and ever-briefer genres, the periodical format aimed to speed up reading. Gandhi regarded such modes of reading as dangerous, and as capable of “macadamizing” the mind (a phrase he took from Thoreau). Instead he sought to turn these structures of haste to different ends. Rather than regarding the breaks in a newspaper as a pretext for hastening ahead, they could as well function as pauses, moments of contemplation to think about what one had read.

Since the newspaper was made up of bits and pieces (often taken from other periodicals, in keeping with the practices of the time), one could juxtapose different kinds of material. In the columns of Indian Opinion one frequently encounters ethical and philosophical extracts among reports on current events. Such juxtapositions encouraged readers to read news at the pace of philosophy and vice versa.

Gandhi gave extensive instructions to readers on how best to read. He urged attentive and careful reading and rereading. He suggested that readers keep copies of the paper and also write out and memorize selections from the newspaper, so they could return again to these passages.

His great manifesto Hind Swaraj (written in 1909 as he returned by ship from England to South Africa) is as much a treatise on reading as it is on ideas of how to deal with colonial rule. The book first appeared in two parts in the Gujarati section of Indian Opinion before being produced as a booklet in an English translation by Gandhi himself.

The book takes the form of a dialogue between a Reader and an Editor in which the latter tries to train the former to read slowly and carefully, to digest ideas before rushing ahead to hasty conclusions. The point of the dialogue is to shift the Reader from being an intemperate hothead to a considered and thoughtful individual. One recurrent method that the Editor uses is to make the Reader return to, and reconsider, ideas that are initially pooh-poohed. The book hence enacts a methodology of reading that Gandhi first experimented with in Indian Opinion.

The book has largely been interpreted as Gandhi’s dialogue with the revolutionary, extremist Indians who favored violence as the most effective anti-colonial strategy. But the text can equally be seen as a book that exemplified Gandhi’s key ideas about reading and its relationship to satyagraha. The book urges patience and slowness as a way of building up one’s own interior independence rather than trusting this will be created on one’s behalf by an anti-colonial movement. The methods of reading the text espouses mirror these themes.

In our own frantic age, with online reading becoming ever more fragmentary, Gandhi’s ideas have deep resonances. As all aspects of life accelerate, we have to seek out the pauses that provide an opportunity for reflection and contemplation. Taking Gandhi’s advice, we can use reading itself as a mode of slowing down the agitated rhythms that drive contemporary life.”

Isabel Hofmeyr is Professor of African Literature at the University of the Witwatersrand in South Africa. After her initial work in African Studies, she has turned to transnational topics, some of these focusing on Indian Ocean themes. She has published widely in this latter area and recently completed a book Gandhi’s Printing Press Experiments in Slow Reading (Harvard University Press, 2013). In its review of Gandhi’s Printing Press, Publishers Weekly wrote, “This thoughtful account is a compelling preview of the colonial subcontinent’s development, as well as Gandhi’s eventual role as peaceful emancipator of his own country.”