Mass in the memory of George Bull, OBE KCSG FRSL

Text of a personal tribute given by Kamran Mofid

On Saturday 28th of March 2015 my wife and I had a stimulating meeting in Camberley, Surrey, with a group of friends from the Human Values Foundation, of which I am a Patron (We welcome Prof. Kamran Mofid as a Patron). I felt very much that I was amongst some wonderful good friends.  They were eager to know more about me.  One thing led to another.  I began to tell my story.  We started to talk about Coventry, as some amongst those at the meeting also had contacts and association with this remarkable city.  I told them about the major positive and constructive impacts on me of Coventry - The City of Peace, Forgiveness and Reconciliation - and its special people, most of all my wife Annie, our sons, Kevin and Paul, Annie's wonderful family and my many Coventrian friends.

I also told them about one particular friend from London, who was and remains a major source of inspiration to me for all I do in the interest of the common good.  That friend was the late George Bull, whom, like me, was equally inspired by Coventry and its history.  George passed away on 6 April 2001.  In a few days’ time it will be the 14th anniversary of his death.  To remember him, I am, for the first time, posting online, the text of my personal tribute to George, delivered at a Mass in his memory at the Chapel, Plater College, Oxford, on Tuesday, 22nd May 2001.

I am in the process of writing a book- as my wife; sons and many friends from Coventry and around the world are urging me- about “My Coventry Story”. The book is due for publication in 2016, in time to mark the 20th anniversary of the establishment of the Centre for the Study of Forgiveness and Reconciliation at Coventry University, which I had co-founded in 1996. 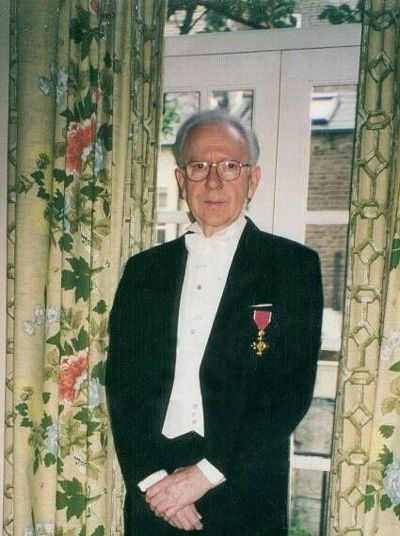 George Bull, in London, before meeting with the Emperor of Japan, 1999

Thank you very much Fr. Noel for saying this mass for my friend George.  George was known well and much respected by many at this college, especially through his life-long involvement with the Chesterton Institute.  I am also very glad that a month or so before his untimely death, the Principal of the College, Mr. Michael Blades, and I together visited George and his dear wife, Dido, in their house in London, where we had a wonderful time, enjoying the gifts of conversation, friendship, food, drinks and joy.  It was a memorable occasion for me, as this was the last time that I saw George.

For me, a path to true happiness, amongst other things, is to have a great friend, to be able to mentor him, to observe him and to learn from him, to be stretched, challenged and be inspired by him.

Since the mid-1980s, I have been that happy man.  I found that friend and mentor.  George had a magnetic personality, was disarming in his forthrightness and simplicity of his manners, vast in the breadth and scope of his learning; he was blessed with a prodigiously retentive memory.  His charming innocence, universal compassion and thirst for true knowledge mark him out as a teacher in the great traditions of religious and philosophical sages who embrace the one universal truth.  He was – and still is - a giant among men, who truly deserves to be described as a “friend to mankind”, “renaissance man”, and “bridge of reconciliation between cultures, religions and civilisations”.

George had a gift for friendship.  He brought out the best in his friends.  A conversation with George, not only was very enjoyable and entertaining, but it also left you intellectually challenged and excited, with new questions in your mind, new books and articles to read, new friends to contact, topics to explore further and so on.

Who was George Bull?  What kind of man was he?  George was born in 1929 to working class parents in the East End of London.  His father died when he was very young.  His mother, who came from an Irish immigrant background, became the main support to the family.  George was educated by the Society of Jesus, for whom he retained a life-long love and support.  The Society took him to Wimbledon College and from there to Brasenose College, Oxford.

While at Wimbledon, he started and edited, a school magazine, called, the Distributist, inspired by his devotion to G. K. Chesterton’s ideas and writings.  All his life he remained a true Chestertonian.  His love for, and respect of, Catholicism meant much involvement with Catholic causes.  He was director and trustee of the Tablet and the Universe; governor of WestminsterChoir School, St. Thomas MoreSchool and St. Mary’s College, Strawberry Hill.  Moreover, for three years he chaired the International Justice and Peace Commission of the Bishops Conference of England and Wales.  He also wrote Vatican Politics and Inside the Vatican.

Given his love of Catholicism, in turn, meant a special love for Italy, Italian Classics and civilisation. He was the translator and biographer of many great books on the lives and works of: Michelangelo; Machiavelli; Vasari; Cellini; Castiglione; Aretino and Pietro della Valle.  Penguin Classics published these books. Most were reprinted many times. For example, his translation of The Prince, by Machiavelli, has been in continuous print over the last 40 years and has sold over 1 million copies. At the time of his death, he was well advanced on a book on the life and works of Dante. Other publications include a major study of the Renaissance as well as Venice: The Most Triumphant City, published by the Folio Society. He also wrote,The Director, His Money and His Job; and Industrial Relations: The Boardroom View. George was also a Fellow of the Royal Society of Literature (FRSL).

In 1986 George became the director of the Anglo-Japanese Economic Institute in London. This is when, and where, I met him first. He introduced me to Japan and to many Japanese friends and facilitated some of my trips to Japan.  We did many national and international conferences together, including: Japan and the U.K. Economy; Forgiveness and Reconciliation; NAFTA and the EU; Japan and the Global Economy; and Iran and the Emerging Global Order.

We also together - in association with and support of the University, the Cathedral and the City Council - instigated and co-founded the Centre for the Study of Forgiveness and Reconciliation at Coventry University and as part of its work, in association with the Ambassadors’ Lecture Series, which we had founded already, invited international speakers including the former presidents of Ireland and South Africa, namely, Mrs. Mary Robinson, and F.W. de Klerk to deliver lectures at Coventry Cathedral. Moreover, we also invited other international speakers including Ambassadors of Japan, Germany, Italy, Egypt, Mexico and the High Commissioner of Canada to deliver lectures on the need for dialogue and mutual respect among different cultures and civilisations at Coventry’s St. Mary’s Guildhall.  We were delighted when Mrs. Robinson accepted our invitation to become the Patron of our newly founded Centre. Our joint activities resulted in many publications.  At George’s suggestion and with the kind support of Canon Paul Oestreicher and Provost John Petty, I received an invitation from Sir Richard Branson to accompany the Coventry delegation (City and Cathedral) to Hiroshima for the unveiling ceremony of the Statue of Reconciliation at Hiroshima Peace Museum, representing Coventry University.

George, amongst many other publications and journals, had founded and edited International Minds to bring together psychological and political aspects of international affairs. I was very honoured when he invited me to join the journal as an advisor and to manage the publications on the relationship between economics, politics and business with ethics, spirituality, and faiths.  He was also most helpful in focusing my mind on my forthcoming book Globalisation for the Common Good.

In recognition of his achievements, in 1990 he was awarded an OBE and then in 1999 he was appointed Knight Commander of the Order of St. Gregory.  In the same year, he was awarded the Order of the Sacred Treasure by the Japanese Emperor.  Now that I have introduced George to you and explained his intellectual and scholarship impact on me, I would like to share with you the way in which he influenced me for who I am and what I do.

George taught me that by respecting and valuing others, I would start to respect and value myself more fully.  He taught me to love and enjoy the world, with all its wonders of diversity and beauty. He encouraged me to always take action in the interest of the common good. We also, on many different occasions, had the opportunity to share with each other, our love and interest of old civilisations and cultures, especially Japan, Italy and Persia. I cannot be more thankful and grateful to him.

I can only say I have lost my greatest friend and mentor.  I will never forget his loving smile, warm words and positive attitudes towards me. I am praying in my own way for my friend George and I ask The Almighty to ensure George’s continuous love for me to inspire me to do what I can for the common good. God grant George eternal rest; he was, in the old idiom, a lovely man, who, if required, may still be a peacemaker in heaven.”