A Story of Suffering and Hope by Canon Paul Oestreicher* 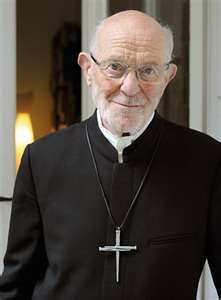 I could not be writing of the pity of war, had not my father survived the gruelling, seemingly endless months of the merciless Battle of the Somme a century ago. When I was twenty five and he sixty years old, my father took me across those battle-fields on a sunny day, through cornflowers and poppies. It felt like the golden rays of the sun were caressing the earth that had been drenched in blood forty years before.  We walked from graveyard to graveyard where men with a name that could still be deciphered were buried in orderly, endless and well-tended rows.

War graves commissions had done their work with respectful care. The inscriptions differed only in their language: French, German, English. Lives given for, lives taken by Patrie, Vaterland, King & Country: the best part of a generation, willing and not so willing victims, united in death. Yet walking across those fields that were witnesses to mindless nationalism did not, strangely, leave me in despair, but only with deep sadness for the grief of those who had loved each of the countless sons and lovers, fathers and brothers whose memory was slowly fading, very slowly. In the bright sunshine, nature seemed to have overcome death. But the clouds were already gathering over Europe.

This had been ‘the war to end all wars’.  It was not. The vengeful Treaty of Versailles that ended it had sowed the seed for an even more criminal catastrophe. My father at 19 had gone straight from school in 1914 to volunteer with patriotic fervour, like so many on both sides. ‘That war’, he often said, ‘left no-one unchanged. You either lost your faith, or found it’. It prepared the ground in my father, born a secular Jew, for a deep commitment to Jesus. Several more years passed before he, by then a young country doctor driving through the snow after visiting a sick baby, heard a voice saying: ‘Go and be baptised.’

From private to lieutenant in the 11th Bavarian Artillery, the end of the war found my father in a field hospital in Alsace, just well enough to run for his life back to Germany, to escape being taken prisoner. Defeat was bitter, his pride in the Fatherland was still intact, but not for very long. In 1918 he fled from the French. In 1938, born of Jewish parents, he fled from the Germans. Hitler’s reign had changed everything. His mother would not survive the Holocaust, his mother to whom he had written dutifully, if only a few lines, every single day of the war. Those letters have now found their way to the new German Museum of Military History in Dresden, a museum that glorifies not war but peace.

The Great War had been pure tragedy. As the historians tell us, it was a war into which the European powers stumbled in their quest for supremacy. The great massacre had been senseless, yet both sides with their chaplains had been made to believe that the call to arms was not just service to their nation, but a sacrifice to God. I still have my father’s belt-buckle inscribed with the words Gott mit Uns. The British Tommies didn’t need that spelled out. They knew which side God was on. Both sides had recruited the same God to their crusade. The Psalmist’s words His mercy endureth forever might just cover even this unconscious blasphemy. On both sides, the young men’s duty was to kill and, if need be, to die. Such is the nature of war.

Commemoration of the dead after two victorious wars is still, in Britain, imbued with deeply rooted nationalism. That is not surprising. The red poppy is a symbol not just of grief but of national pride. Not to wear it has, in public life, become almost impossible. Patriotism demands no less. Its charitable purpose, to assist all war veterans, could not be better. I will give to that gladly, but wear it, no. Its nationalist overtones fail to take account of our common humanity, our shared vulnerability. Our ceremonies still fail to challenge our national pride. How telling was Margaret Thatcher’s anger when after the Falklands War Archbishop Runcie prayed in St Paul’s for the Argentinean dead as well as our own. Had he not been prepared to do so, Cardinal Hume had threatened to stay away.  That humanity is above all nations should be, yet is far from, obvious in our national consciousness. Is Brexit’s success not warning enough?

In Germany after two lost wars, the mood is very different: penitence rather than pride. In Berlin’s central act of worship on the National Day of Grief three years ago, its Remembrance Sunday, I, an Anglican pacifist with a German Jewish background, was invited to preach by the German War Graves Commission. Yes, the German top brass were there at the state ceremony, military band and all, with the President speaking only of the duty to be peacemakers. Could the British Legion have invited anyone like me?

My once chauvinist, right-wing German nationalist father had made the long journey before he died to becoming a liberal Quaker, who nonetheless continued to love dearly the Fatherland that had betrayed and rejected him. Patriotism takes many forms. In his wallet, close to his heart, he always carried the prayer attributed to St Francis: Lord, make me an instrument of your peace.

* Canon Paul Oestreicher, a residentiary canon of Coventry Cathedral and former director of the Cathedral's Centre for International Reconciliation, founding Chair of Amnesty International; Vice President, Campaign for Nuclear Disarmament (CND); and a lifetime worker for peace and social Justice.