The Lost Decade: The Hidden Story of How Austerity Broke Britain*

‘Between 2010 and 2020, Conservative cuts destroyed the fabric of society as we know it. Speaking to people on the frontline reveals the ways our lives have been changed forever...’ 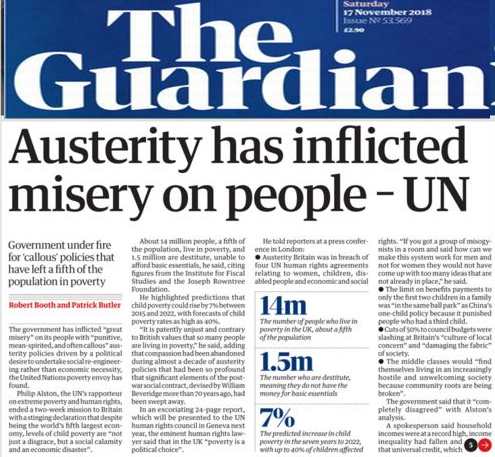 ‘The UK government has inflicted “great misery” on its people with “punitive, mean-spirited, and often callous” austerity policies driven by a political desire to undertake social re-engineering rather than economic necessity, the United Nations poverty envoy has found.’

‘The outcome of austerity policies in Britain and elsewhere has become painfully clear: increased child poverty and social misery; declining life expectancy; an increase in racial inequality; decaying public schools and public health and other public services; and all-around catastrophe for disabled people.’ More on these a bit later.

First, Lest We Forget

Nearly nine years ago, in May 2011, I shared the following in an email with our GCGI Friends, which I believe must be remembered again, its words and sentiments,feelings and emotions, more true today, than the day they I wrote them:

Read more: The Broken Economic Model and the Inhumanity of the Lost Decade of Austerity