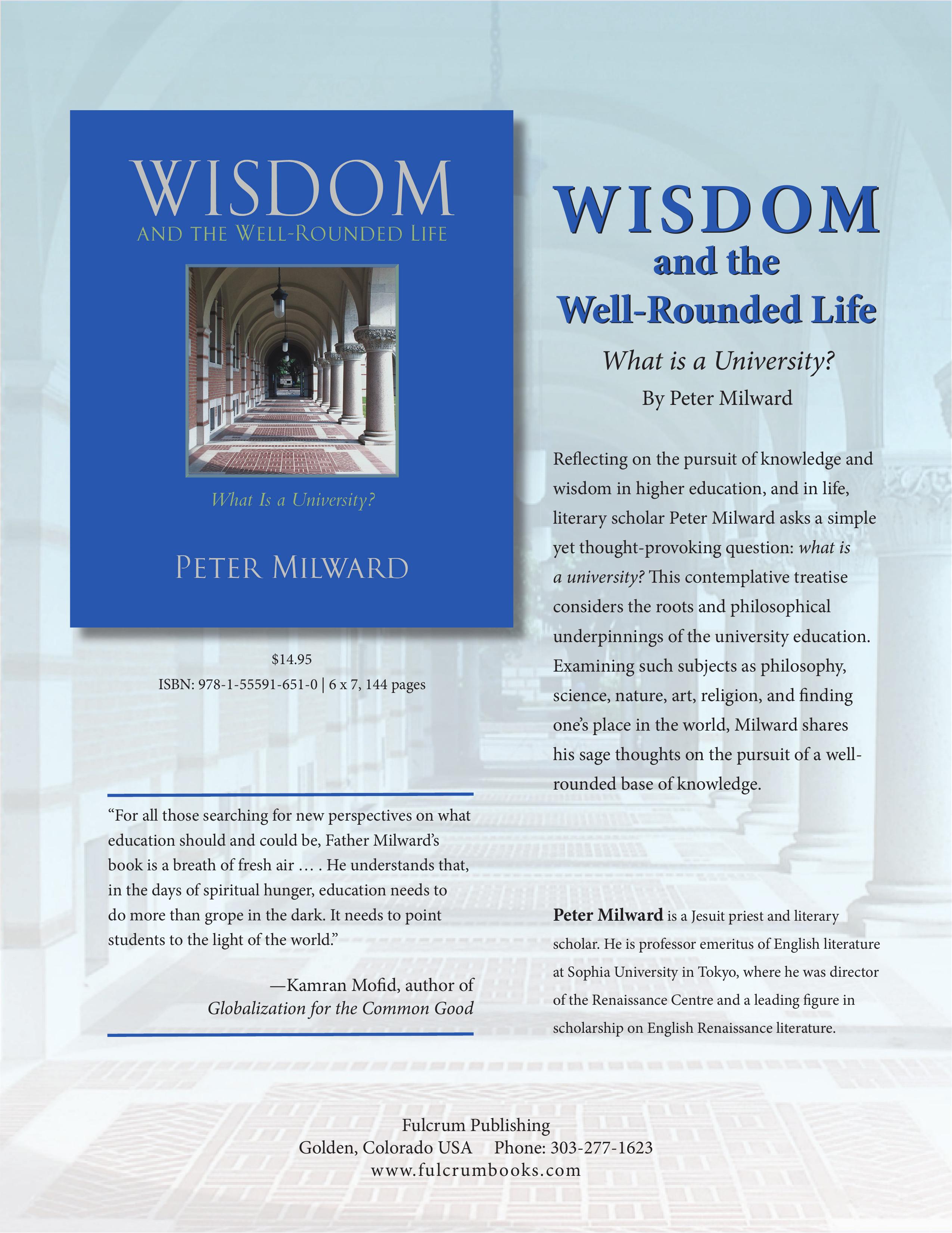 Fr. Peter Milward, My Friend and My Spiritual Mentor

‘As you will discover when you begin to read this book, he is a truly remarkable man. His charming innocence, universal compassion and thirst for true knowledge mark him out as a teacher in the great tradition of religious and philosophical sages who embrace the one universal truth. He is a giant among men, who truly deserves to be described as a Renaissance man, a friend to mankind and a bridge of reconciliation between cultures. It goes without saying that I was delighted and honoured when he asked me to write the Foreword to this book.’

Father Peter Milward, SJ (12 October 1925 London – 16 August 2017 Tokyo) was a Jesuit priest and literary scholar. He was emeritus professor of English Literature at Sophia University in Tokyo and a leading figure in scholarship on English Renaissance literature. He was chair of the Renaissance Institute at Sophia University from its inception in 1974 and director of the Renaissance Centre from its start in 1984. He primarily published about the works of William Shakespeare and Gerard Manley Hopkins.

A short story about When Kamran met Fr. Milward, SJ and the idea of What Is A Univerity

In 1999/2000 in search of life’s biggest questions in my struggles to become a different academic economist to what I had become, I began to study Pastoral Theology at Plater College- a Catholic adult education establishment-  in Oxford. In 2001 I received a Certificate in Education in Pastoral Studies. In 2002 I authored and published Globalisation for the Common Good, which was mainly on globalisation and Catholic Social Teaching.

Soon after this publication I had a phone call from a conference organiser on An Interfaith Dialogue, which was going to be held at Campion Hall, University of Oxford, inviting me to the Hall for a meeting. I was delighted to discover that they wanted me to make a presentation based on my new book.

When the Conference was finished, somehow, Fr. Milward invited me for a coffee. I had a most wonderful and inspiring conversation with him and I was so happy that he also liked the book I had published.

Then a few months after the Camion Hall meeting, I convened the inaugural GCGI Conference on “An Interfaith Perspective on Globalisation”  at Plater College. I was so happy that Fr. Milward accepted my invitation to participate at the conference. He gave a most fascinating talk on  ‘The Globalisation of Shakespeare.’

Still more good news was on its way. I had a lovely letter from Japan. Fr. Milward was inviting me to spend a couple of weeks as resident scholar at Sophia University and the Renaissance Institute. Wow! I was feeling so happy, so excited.

I went to Japan. Fr. Milward had organised a series of lectures for me at Sophia, as well as at a number of think tanks, civil societies, religious, cultural and literary organisations and more in different locations across Japan.

Whilst in Tokyo, as well as when we were travelling on the Shinkansen, I had some of the most beautiful, enriching and inspiring conversations with Fr. Milward. It was then that he also told me he wanted to organise and arrange the translation of my book into Japanese and have it published in Tokyo, which he did.

Another topic of our long conversation was on education, universities, meaning and their meaningfulness, values and relavance. He shared many hand-written documents, manuscripts, etc with me. The more I read them, the more I discovered that they are truly a gem, words of wisdom, a treasure trove.

One evening, when I had been given the honour of  having dinner with the Jesuit community at the Jesuit House at Sophia University, I don't know why, but I turned to Fr. Milward  and said, Father, it would be a tradgedy if you do not put all these hand-written documents together and publish a book with a title of What is a University?

I also told him that, in that endeavour I could perhaps be of some assistance to him. I mentioned that I knew of a very good and ethical publisher in London, namely, Shepheard- Walwyn, who had published a few of my books, and ensured him of the excellent standards of its Editor-in- Chief, Anthony Werner. Fr. Milward listened carefully, but did not say anything.

A few days later, at Narita Airport, as I was leaving for London, he said to me that, (as best as I can recall) ‘Kamran, I am going to do as you suggested the other evening. I am coming to London next month. Please arrange a meeting for me with Anthony Werner. But now you must do a bit of work for me and write the Foreword to my book.’ The book was published in 2006, in London and again in the US in 2009 by Fulcrum under the title of ‘Wisdom and the Well-Rounded Life: What is a University?'

By now, Fr. Milward and I had become very good friends. He invited me again to Japan. And I was delighted when he came to a couple of our GCGI Annual Conferences, delivering Keynote lectures, notably in Dubai 2004 and Hawaii 2006. 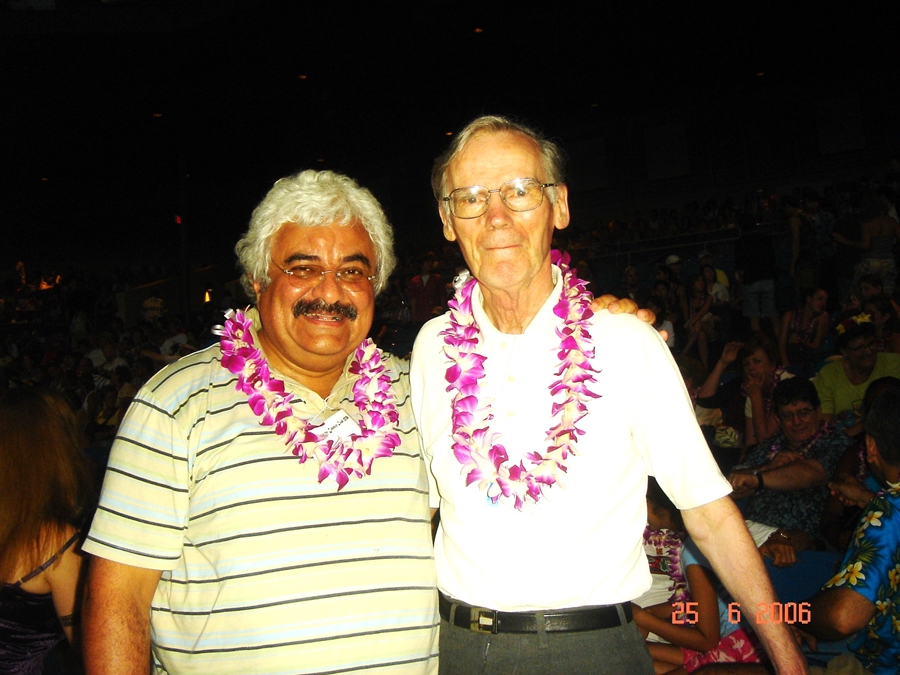 And now, Fr. Milward is gone. And I miss him so much.

He taught me many wonderful lessons. He told me that by respecting and valuing others, I would start to respect and value myself more fully.  He taught me to love and enjoy the world, with all its wonders of diversity and beauty. He encouraged me to always take action in the interest of the common good. We also, on many different occasions, had the opportunity to share with each other our love and interest in old civilisations and cultures, especially Britain, Japan,  and the land of my birth, Persia. I cannot be more thankful and grateful to him.

I can only say I have lost a great friend and mentor.  I will never forget his loving smile, warm words and positive attitudes towards me. I am praying in my own way for my friend Peter and I ask The Almighty to ensure his continuous love for me to inspire me to do what I can for the common good. God grant Peter eternal rest; he was, in the old idiom, a lovely man, who, if required, may still be a peacemaker in heaven.

'Reflecting on the pursuit of knowledge and wisdom in higher education and in life, this thoughtful treatise considers the roots and philosophical underpinnings of university education. Examining such subjects as philosophy, science, nature, art, religion, and finding one's place in the world, Peter Milward shares his sage thoughts on obtaining a well-rounded base of knowledge.'