Continuing on my Blog postings “Britain engulfed in corruption” highlighting the major deficiencies of crony capitalism in the UK, today our attention should also be focused on “Deficient British democracy”.

“A study into the state of democracy in Britain over the last decade warns it is in "long-term terminal decline" as the power of corporations keeps growing, politicians become less representative of their constituencies and disillusioned citizens stop voting or even discussing current affairs.”…

The report “found evidence of many other areas where Britain appeared to have moved further away from its two benchmarks of representative democracy: control over political decision-making, and how fairly the system reflects the population it represents – a principle most powerfully embedded in the concept of one person, one vote.”…Continue to read 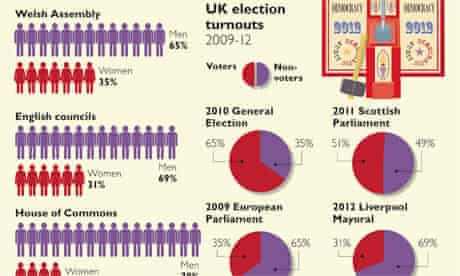 2012 Democratic Audit: British democracy in 'terminal decline'. Get the data