A reflection on the global application of a fraudulent economic theory which has  brought the west to its knees. Yet for those in power, it offers riches well beyond the wildest dreams of the ordinary working classes 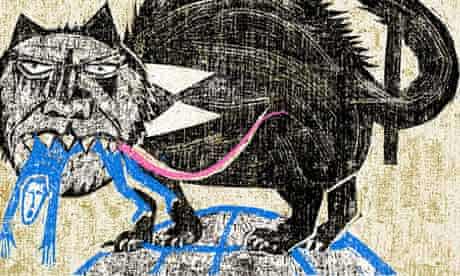 “The demands of the ultra-rich have been dressed up as sophisticated economic theory and applied regardless of the outcome.”

“In 2012, the world's 100 richest people became $241 billion richer. They are now worth $1.9 trillion: just a little less than the entire output of the United Kingdom.

This is not the result of chance. The rise in the fortunes of the super-rich is the direct result of policies. Here are a few: the reduction of tax rates and tax enforcement; governments' refusal to recoup a decent share of revenues from minerals and land; the privatisation of public assets and the creation of a toll-booth economy; wage liberalisation and the destruction of collective bargaining.

The policies that made the global monarchs so rich are the policies squeezing everyone else. This is not what the theory predicted. Friedrich Hayek, Milton Friedman and their disciples – in a thousand business schools, the IMF, the World Bank, the OECD and just about every modern government – have argued that the less governments tax the rich, defend workers and redistribute wealth, the more prosperous everyone will be. Any attempt to reduce inequality would damage the efficiency of the market, impeding the rising tide that lifts all boats. The apostles have conducted a 30-year global experiment, and the results are now in. Total failure.

…The demands of the ultra-rich have been dressed up as sophisticated economic theory and applied regardless of the outcome. The complete failure of this world-scale experiment is no impediment to its repetition. This has nothing to do with economics. It has everything to do with power.”...Continue to read