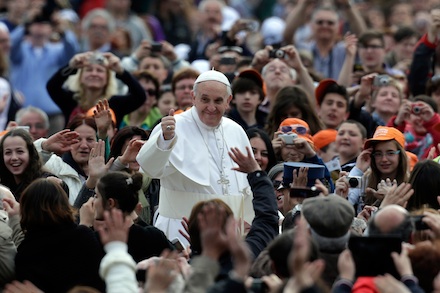 on the day in which the Church celebrates the Feast of Saint Joseph the worker, the day when nations across the world celebrate International Workers Day, Pope Francis reached out with this tweet: “I ask everyone with political responsibility to remember two things: human dignity and the common good”

In a world in which over 202 million people are unemployed and daily news reports bear witness to the dramatic reality of so many people who are bearing the brunt of the global economic crisis, since the very beginning of his pontificate Pope Francis has reiterated his concern and expressed his strong position regarding the dignity of labour

Here are some excerpts from some of Pope Francis’ discourses and speeches to workers and to those in position of responsibility in this field.

Meeting with Italian Steelworkers on 20 March 2014:

In the current economic climate and the difficulties facing the work environment, the Pope said, “it is necessary to reaffirm that employment is an essential reality for society, for families and for individuals. Work, in fact, directly regards the person, his/her life, freedom and happiness. The primary value of employment is the good of the human person,” because, the Pope explained, it “realizes a person,” intellectually by making demands on his or her attitudes and creative and manual abilities. Employment, then, should not be considered simply as a means for obtaining profit, he continued, “but above all a purpose that affects man and his dignity. And if there is no work, this dignity is wounded! Anyone who is unemployed or underemployed risks, in fact, being placed on the margins of society, becoming a victim of social exclusion. Many times it happens that people out of work - I think especially of the many unemployed young people today - slip into chronic discouragement or worse, apathy.”

In his address during the General Audience in St. Peter’s Square on 1 May, 2013:

“I wish to extend an invitation to solidarity to everyone, and I would like to encourage those in public office to make every effort to give new impetus to employment, this means caring for the dignity of the person” (…) “I would like to add a word about another particular work situation that concerns me: I am referring to what we could define as “slave labour”, work that enslaves. How many people worldwide are victims of this type of slavery, when the person is at the service of his or her work, while work should offer a service to people so they may have dignity. I ask my brothers and sisters in the faith and all men and women of good will for a decisive choice to combat the trafficking in persons, in which “slave labour” exists”

In his apostolic exhortation Evangelii Gaudium published on 24 November 2013:

"Just as the commandment 'Thou shalt not kill' sets a clear limit in order to safeguard the value of human life, today we also have to say 'thou shalt not' to an economy of exclusion and inequality. Such an economy kills." And reminding the faithful that living and sharing the joy of the Gospel necessarily demands that Christians have a deep and active concern for the plight of the poor who suffer so many injustices from an economy that puts profit above people ne writes: “Today everything comes under the laws of competition and the survival of the fittest, where the powerful feed upon the powerless. As a consequence, masses of people find themselves excluded and marginalized: without work, without possibilities, without any means of escape”. "Human beings are themselves considered consumer goods to be used and then discarded."

*See the original source of this article: