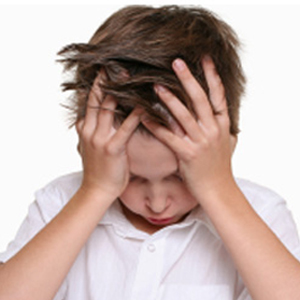 Expectations surrounding education have spun out of control. On top of a seven-hour school day, our children and grand children march through hours of homework, tests after tests, and activities seen as steps on the ladder to a “top” university, an “enviable” job and a “successful” life. Across the world, children are experiencing depression, anxiety, self-harm and suicide because of the pressures of school. Is it worth it? Think about it.

“Children are suffering an epidemic of mental health problems in Britain today due to family breakdown, body image worries and too many school tests. Under far greater pressure than youngsters a generation ago, they are increasingly falling victim to depression, anxiety, eating disorders and severe anti-social behaviour.” 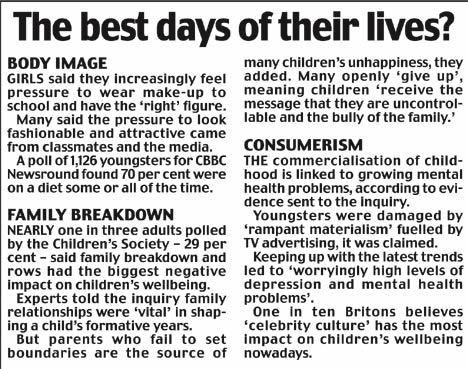 Given this, it is sickening that the only thing the majority of British politicians talk about is the so-called “Aspiration”: more destructive competition, selfishness, arrogance, greed, jealousy, and indifference, encouraging the belief that what matters most is money and more money:

What is this so-called aspiration?

What about students at universities, their health and well-being?

“Today I have the grim task of sounding an alarm about the spread of an illness that is rapidly becoming the pandemic disease of the 21st century: An epidemic of depression, anxiety, self-harm and suicide amongst the children, the youth and students world-wide. This tragedy is global and need a global solution”

Things are not any better in Japan either!

‘Last year, for the first time, the most common cause of death of those aged 10 to 19 in Japan was suicide’.

And it is not better in Singapore either!

Let's not make our children sick with drive for success, Letters in Print News & Top Stories - The Straits Times

“Is the Drive for Success Making Our Children Sick?” 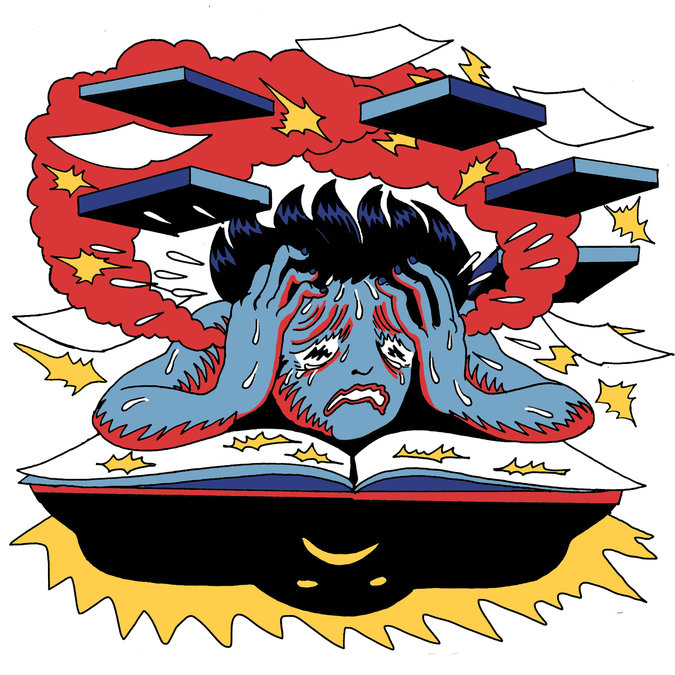 “STUART SLAVIN, a pediatrician and professor at the St. Louis University School of Medicine, knows something about the impact of stress. After uncovering alarming rates of anxiety and depression among his medical students, Dr. Slavin and his colleagues remade the program: implementing pass/fail grading in introductory classes, instituting a half-day off every other week, and creating small learning groups to strengthen connections among students. Over the course of six years, the students’ rates of depression and anxiety dropped considerably.

But even Dr. Slavin seemed unprepared for the results of testing he did in cooperation with Irvington High School in Fremont, Calif., a once-working-class city that is increasingly in Silicon Valley’s orbit. He had anonymously surveyed two-thirds of Irvington’s 2,100 students last spring, using two standard measures, the Center for Epidemiologic Studies Depression Scale and the State-Trait Anxiety Inventory. The results were stunning: 54 percent of students showed moderate to severe symptoms of depression. More alarming, 80 percent suffered moderate to severe symptoms of anxiety.

“This is so far beyond what you would typically see in an adolescent population,” he told the school’s faculty at a meeting just before the fall semester began. “It’s unprecedented.” Worse, those alarming figures were probably an underestimation; some students had missed the survey while taking Advanced Placement exams.

What Dr. Slavin saw at Irvington is a microcosm of a nationwide epidemic of school-related stress. We think of this as a problem only of the urban and suburban elite, but in traveling the country to report on this issue, I have seen that this stress has a powerful effect on children across the socioeconomic spectrum.

Expectations surrounding education have spun out of control. On top of a seven-hour school day, our kids march through hours of nightly homework, daily sports practices and band rehearsals, and weekend-consuming assignments and tournaments. Each activity is seen as a step on the ladder to a top college, an enviable job and a successful life. Children living in poverty who aspire to college face the same daunting admissions arms race, as well as the burden of competing for scholarships, with less support than their privileged peers. Even those not bound for college are ground down by the constant measurement in schools under pressure to push through mountains of rote, impersonal material as early as preschool.

Yet instead of empowering them to thrive, this drive for success is eroding children’s health and undermining their potential. Modern education is actually making them sick.

Nearly one in three teenagers told the American Psychological Association that stress drove them to sadness or depression — and their single biggest source of stress was school. According to the Centers for Disease Control and Prevention, a vast majority of American teenagers get at least two hours less sleep each night than recommended — and research shows the more homework they do, the fewer hours they sleep. At the university level, 94 percent of college counseling directors in a survey from last year said they were seeing rising numbers of students with severe psychological problems.

At the other end of the age spectrum, doctors increasingly see children in early elementary school suffering from migraine headaches and ulcers. Many physicians see a clear connection to performance pressure.

“I’m talking about 5-, 6-, 7-year-olds who are coming in with these conditions. We never used to see that,” says Lawrence Rosen, a New Jersey pediatrician who works with pediatric associations nationally. “I’m hearing this from my colleagues everywhere.”

What sets Irvington apart in a nation of unhealthy schools is that educators, parents and students there have chosen to start making a change. Teachers are re-examining their homework demands, in some cases reviving the school district’s forgotten homework guideline — no more than 20 minutes per class per night, and none on weekends. In fact, research supports limits on homework. Students have started a task force to promote healthy habits and balanced schedules. And for the past two years, school counselors have met one on one with every student at registration time to guide them toward a manageable course load.

“We are sitting on a ticking time bomb,” said one Irvington teacher, who has seen the problem worsen over her 16 years on the job.

A growing body of medical evidence suggests that long-term childhood stress is linked not only with a higher risk of adult depression and anxiety, but with poor physical health outcomes, as well. The ACE (Adverse Childhood Experiences) Study, a continuing project of the Centers for Disease Control and Kaiser Permanente, shows that children who experience multiple traumas — including violence, abuse or a parent’s struggle with mental illness — are more likely than others to suffer heart disease, lung disease, cancer and shortened life spans as adults. Those are extreme hardships but a survey of the existing science in the 2013 Annual Review of Public Health suggested that the persistence of less severe stressors could similarly act as a prescription for sickness.

“Many of the health effects are apparent now, but many more will echo through the lives of our children,” says Richard Scheffler, a health economist at the University of California, Berkeley. “We will all pay the cost of treating them and suffer the loss of their productive contributions.”

Paradoxically, the pressure cooker is hurting, not helping, our kids’ prospects for success. Many college students struggle with critical thinking, a fact that hasn’t escaped their professors, only 14 percent of whom believe that their students are prepared for college work, according to a 2015 report. Just 29 percent of employers in the same study reported that graduates were equipped to succeed in today’s workplace. Both of those numbers have plummeted since 2004.

Contrary to a commonly voiced fear that easing pressure will lead to poorer performance, St. Louis medical school students’ scores on the medical boards exams have actually gone up since the stress reduction strategy was put in place.

At Irvington, it’s too early to gauge the impact of new reforms, but educators see promising signs. Calls to school counselors to help students having emotional episodes in class have dropped from routine to nearly nonexistent. The A.P. class failure rate dropped by half. Irvington students continue to be accepted at respected colleges.

There are lessons to be learned from Irvington’s lead. Working together, parents, educators and students can make small but important changes: instituting everyday homework limits and weekend and holiday homework bans, adding advisory periods for student support and providing students opportunities to show their growth in creative ways beyond conventional tests. Communities across the country — like Gaithersburg, Md., Cadiz, Ky., and New York City — are already taking some of these steps. In place of the race for credentials, local teams are working to cultivate deep learning, integrity, purpose and personal connection. In place of high-stakes childhoods, they are choosing health.”

*Vicki Abeles is the author of “Beyond Measure: Rescuing an Overscheduled, Overtested, Underestimated Generation,” and director and producer of the documentaries “Race to Nowhere” and “Beyond Measure.”

The above article by Vicki Abeles was first published in New York Times on 2 January 2016:

Is the Drive for Success Making Our Children Sick? - The New York Times

Depression in children and teens 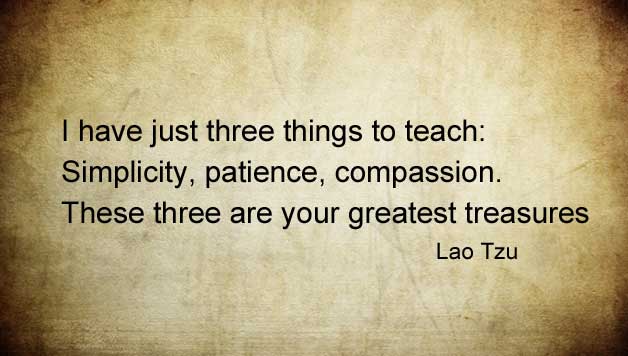 A Response from Kamran Mofid to an article on higher education by Prof. AC Grayling, Master, the New College of the Humanities