It seems, tragically, the world is edging towards a most destructive war of all sorts. Some call it the “Mother of All Wars”!

I offer this book, which was originally published in 2008, as our humble contribution, to assist us in our search for wisdom and the common good. 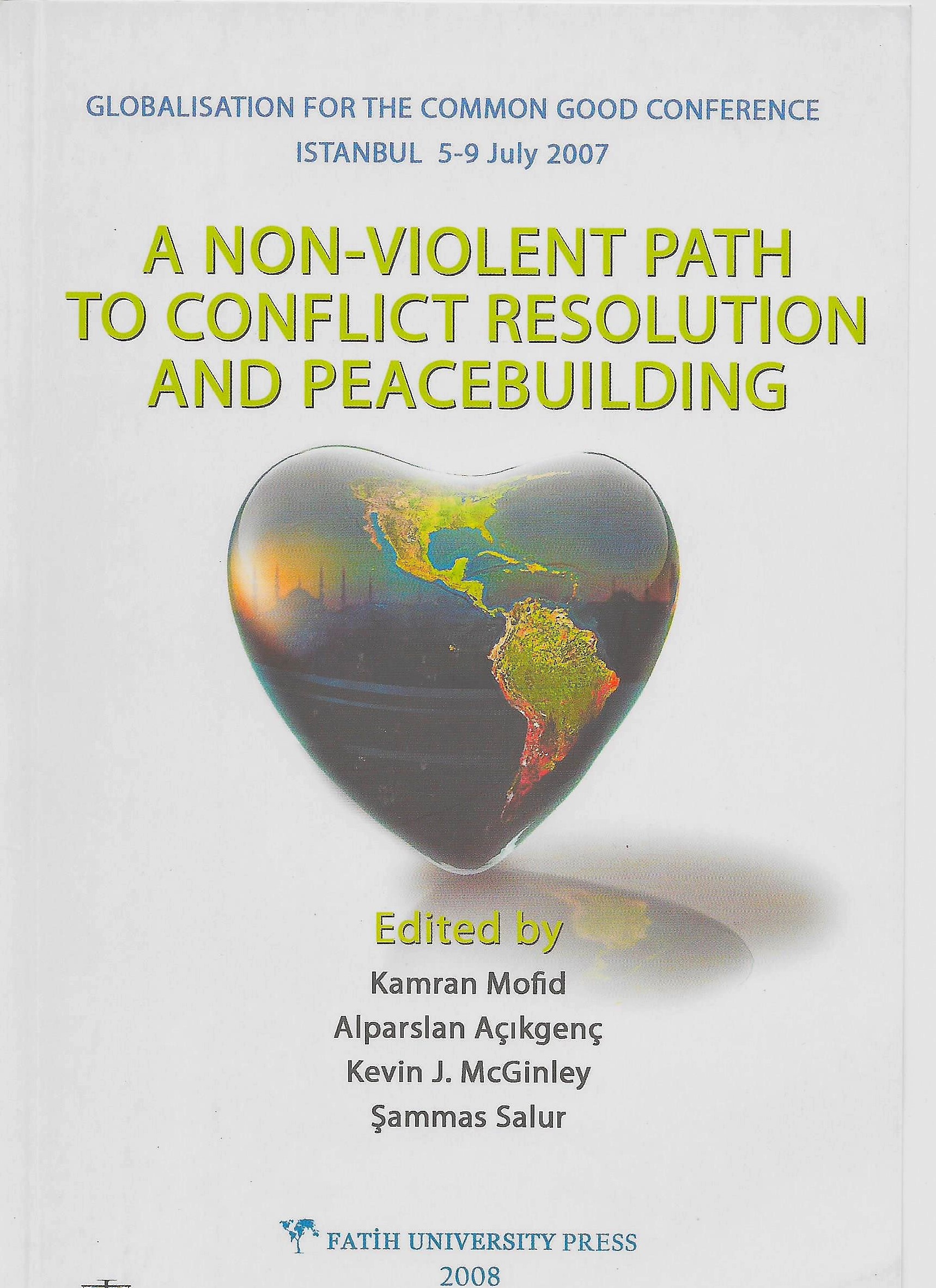 Globalisation for the Common Good Initiative

THE ISTANBUL DECLARATION: A Non-Violent Path to Conflict Resolution and Peacebuilding

This book presents a multidisciplinary array of essays offering new perspectives on how religion can affect the pursuit of world peace in the age of globalisation. The collection features contributions from scholars, peace activists, political figures, and theologians from across the world’s major religions, including Buddhism, Christianity, Hinduism, Islam, and Judaism.

The Globalisation for the Common Good Initiative was established in 2002 by Prof. Kamran Mofid. Its main goal is to unite representatives of the world’s religions, cultures and civilisations in developing an understanding of globalisation not merely in terms of economic relations and mercantile forces, but as enabling positive intercultural and interfaith encounters. The aim is to bring different cultures and faiths closer together, to understand what they have in common and how we might draw on their ethical, spiritual, and theological insights to develop an active agenda for change in the international community’s economic and development policies, so as to better promote global peace, justice, and human well-being across the globe.

The Globalisation for the Common Good Initiative commenced its mission with an international conference held in 2002 in Oxford, UK. Subsequent years saw the annual conference and the GCGI community grow as it moved across the continents through Russia, Dubai, Kenya, and Hawaii. The Sixth Annual Conference took place in 2007. It took as its theme nonviolent conflict resolution and peacebuilding as being particularly appropriate for the setting of Istanbul, traditional gateway between east and west.

The papers from the conference presented in this volume, while all addressing vital issues of inter-religious and intercultural relations as they affect global politics today, cover a startlingly wide range of topics—law, human rights, media, philosophy, psychology, counter-terror policies, traditions of non-violent resistance, international aid and development, business ethics, information technology, as well as studies of specific situations of global political interest.

The papers, however, are united in the conviction that policy-making and strategic decisions informed by a stronger interreligious understanding can make something positive of religious difference by drawing on the insights of the world’s religions to help build a more humane society.

Prof. Kamran Mofid is founder of the Globalisation for the Common Good Initiative.

Prof. Alparslan Açıkgenç is Vice-President and Head of Philosophy at Fatih University, Istanbul.

‘The annual conference of the Globalisation for the Common Good Initiative had ranged far across the world before 2006, through England, Russia, Dubai, Kenya, and Hawaii. The GCG conference created and continues to create an ever-widening international community of scholars, forging links and establishing dialogues across national, cultural, and religious boundaries and putting into practice the movement’s core philosophy: that globalisation need not be defined merely in terms of impersonal market forces, but can be a power for good, building spiritual bonds that can unite humanity and bring different cultures and faiths closer together.

Istanbul was the perfect location for the Sixth Conference on Globalisation for the Common Good. Straddling two continents and with an astoundingly rich cultural history which has been shaped by Islam, Catholic and Orthodox Christianity, and Judaism, as well as by far-reaching and long-standing links to Europe, the Middle and Far East, Africa, and Russia and the Caucasus, the city is a living image of human life enriched by the inter-faith dialogue and cross-cultural fertilisation that the GCG initiative seeks to foster across the globe. As a living bridge between East and West, Istanbul was the perfect site to explore the means to achieve conflict resolution and peacebuilding through nonviolent means.

Fatih University was honoured to host this conference, seeing it as fully in harmony with the university’s goal of promoting education as a means of integrating local cultural perspectives within a global framework. For five wonderful days, we at Fatih University savoured a lively and enriching dialogue that flowed smoothly across the borders of cultural, national, and religious difference. This book, wide ranging and illuminating as the essays it contains are, can give only a taste of the positive and fruitful diversity which made the conference so memorable. Scholars, diplomats, peace workers, journalists, and students freely mingled and disciplinary boundaries dissolved as scientists, theologians, artists, and social scientists constructively exchanged views on religion, faith, and peace. Bonds of understanding and friendship were formed that will last well into the future and which bode well for the goals of the Globalisation for the Common Good movement.

We at Fatih University are proud to have been host to such an enlightening set of multi-cultural inter-faith encounters and look forward to seeing the many relationships and dialogues established here continuing and being built on in future GCG conferences, in Melbourne, Chicago and beyond.’

A Non-Violent Path to Conflict Resolution and Peacebuilding: Read a Brief Introduction

You can also contact SHEPHEARD-WALWYN PUBLISHERS directly to order the book: