Wow! What a sermon that was: 'love is the way'. Amen 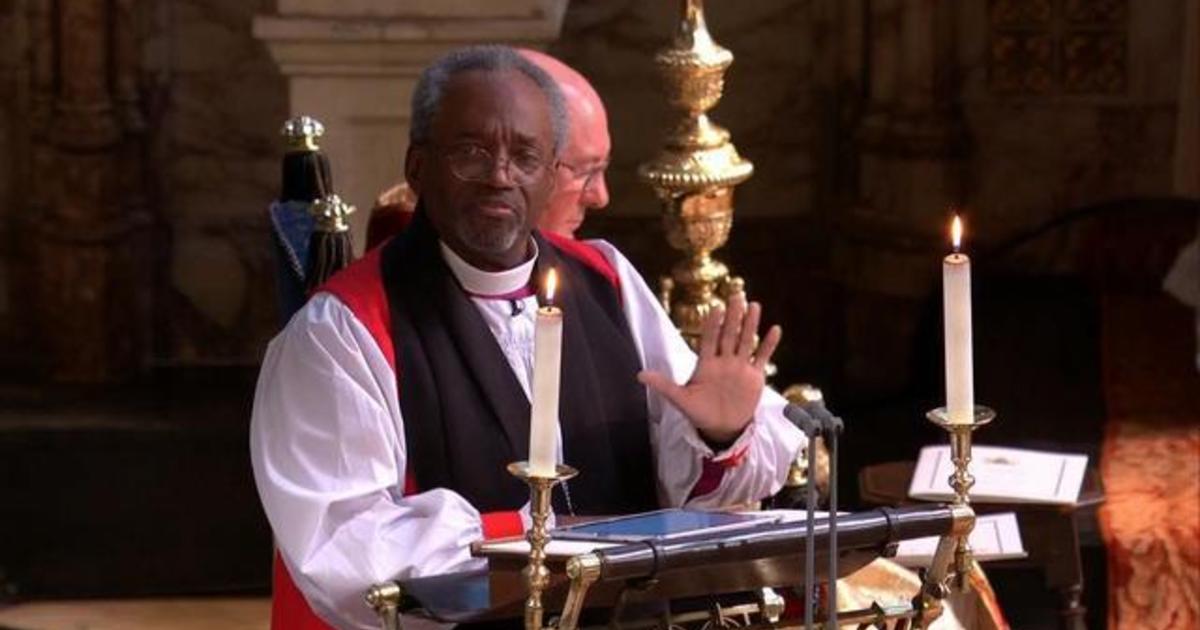 ‘It was a sermon that will go down in history as a moment when the enduring seat of colonialism was brought before the Lord, and questioned in its own house. In the mention of slavery was the inherent accusation of white silver-spoon complicity, and that this union should not go forth without acknowledging it.’

‘Curry’s sermon was one of three moments during the royal wedding when I felt moved. I had not expected to be moved. I had expected to remain full of cold indignation at the pomp and aristocratic indulgence of the day, at the preparatory shooing of the homeless off the streets of Windsor by police officers who should be tending to more important things like knife crime, at the £32m shamelessly spent amid the rising presence of foodbanks and child poverty. The first of these moments was Ragland arriving at the chapel, a black woman quietly alone, being assisted from her car by a representative of an institution that had partaken in her oppression and was now required to respect her. The other was the Kingdom Choir’s beautiful rendition of Stand By Me, in part because it followed the sermon.

Reading from his iPad, gesticulating, swinging his robes, smiling, rocking back and forth on his feet, Curry was in complete contrast to the solemn and stationary ecclesiastical address that preceded his. Where there was stillness, now there was movement. For 14 minutes he preached in the full-throated, uninhibited, theatrical and emotive style of the traditional African-American church. He preached of Moses and Jesus of Nazareth, the Hebrew scriptures and the “old slaves in America’s antebellum South” who recognised in their singing of spirituals, “even in the midst of their captivity”, that there is “a balm in Gilead to make the wounded whole”. Quoting from Martin Luther King to begin and end the speech, this was not something ever witnessed within the lofty walls of the pinnacle of the Anglican establishment at a royal wedding. This was a speech that could have been lifted straight out of the pages of James Baldwin or ZZ Packer.

An ardent campaigner for social justice, particularly on immigration and same-sex marriage, Chicago-born Curry, himself a descendent of slaves, did not tone down his passionate message of the social and political power of love in order to align with the reserve of his pale and stately onlookers. He did not filter. He did it black, with music in his arms, and rhythm in his voice, and a looseness and openness in his face that supposed an almost familial acquaintance with his audience.

In his world, words do not travel alone from the mouth, with just their letters and their grammar for company. Here the body comes too, giving life to the words, lifting them into the air to float and dance into comprehension and human feeling. For Zara Tindall, captured open-mouthed in her pricey, shiny teal in the pews, it was something to behold.

The expressions on the faces of the congregation around the church were also something to behold, ranging from empathy to bemusement to confusion to downright scorn. Four minutes in, Camilla Parker Bowles’s ludicrous hat was trembling as she held down her head: was she laughing? Prince Charles was also bowed, red around the ears, more so than usual: was he?

There was half a smirk at the Duchess of Cambridge’s mouth, and, when Curry exclaimed: “Oh that’s the balm in Gilead!”, throwing up his hands in emphasis, the Queen straightened in her chair, purse-lipped. Meanwhile, Oprah swayed. Ragland looked steadily on, a little sadly, as if aware of something of which others were not, yet also with an innate sweetness; while her daughter sat holding hands with her prince, occasionally conferring in love-soaked whispers.

It was a sermon that will go down in history as a moment when the enduring seat of colonialism was brought before the Lord, and questioned in its own house. In the mention of slavery was the inherent accusation of white silver-spoon complicity, and that this union should not go forth without acknowledging it.

“Love is the way,” Curry chanted, in a rolling, conversational repetition borne of the deep south. “When love is the way, we actually treat each other, well” – he put his hand on his hip and his elbow on the lectern – “like we are actually a family”. A utopia for our time indeed, delivered with a grand humility apparently wasted on some of its listeners, who were not quite expecting such blackness from a black bride.’

Who is Michael Curry? The minister who told royal wedding 'love is the way'

...And now finally a note from me:

In his wonderful sermon, Bishop Michael, shared many beautiful and timeless gems with us. One of those gems that landed right on my heart, was when he told us about the power of ‘ Love and Imagination’ (see below).

‘That’s what love is. Love is not selfish and self-centred. Love can be sacrificial, and in so doing, becomes redemptive. And that way of unselfish, sacrificial, redemptive love changes lives, and it can change this world.

If you don’t believe me, just stop and imagine. Think and imagine a world where love is the way.

Imagine our homes and families where love is the way.

Imagine our neighbourhoods and communities where love is the way.

Imagine our governments and nations where love is the way.

Imagine business and commerce where this love is the way.

Imagine this tired old world where love is the way.’

This very much resonates with me, as I have also came to believe in the awesome power of love and imagination to heal our troubled world.

Let me quote a relevant passage from a lecture I gave at the Oxford Theology Society, Keble College, University of Oxford in 2017:

‘Imagine a political system that puts the public first.  Imagine the economy and markets serving people rather than the other way round.  Imagine us placing values of respect, fairness, interdependence, and mutuality at the heart of our economy. Imagine an economy that gives everyone their fair share, at least an appropriate living wage, and no zero-hour contracts.  Imagine where jobs are accessible and fulfilling, producing useful things rather than games of speculation and casino capitalism. Imagine where wages support lives rather than an ever expanding divisions and separations between the top 1% and the rest.  Imagine a society capable of supporting everyone’s needs, and which says no to greed. Imagine unrestricted access to an excellent education, healthcare, housing and social services. Imagine hunger being eliminated, no more food banks and soup kitchens. Imagine each person having a place he/she can call home.  Imagine all senior citizens living a dignified and secure life. Imagine all the youth leading their lives with ever-present hope for a better world. Imagine a planet protected from the threat of climate change now and for the generations to come. Imagine no more wars, but dialogue, conversation and non-violent resolution of conflicts.

This is the world I wish to see and I believe we have the means to build it, if we take action in the interest of the common good.

We must begin to seriously think, ponder and reflect together on Life’s Big Questions, questions of meaning, values and purpose:’ Continue to read-Oxford Theology Society Lecture: Values to Make the World Great Again