Private education, posh boys and the ruining of Britain:The Story Straight from the horse's mouth

...And this, the charge sheet concludes, is now inflicting serious harm on the whole fabric of our society and community, with tragic consequences for us all, and especially for our children and grandchildren.

The Big Question surely must be: Why are these people behaving like this? Who has given them the right to think that they know it all and that they are taking action on our behalf, for our well-being for our betterment?

I tried to find out, and I think I have. There you have it:

Men of the people? David Cameron, Boris Johnson and a few more Posh Boys in the livery of the Oxford University Bullingdon Club

‘What did I learn at private school? They should be abolished’

By Angus Satow, via The Guardian*

‘Private schools like my alma mater St Paul’s entrench inequality. Abolishing them would be a progressive step’

‘The educational dominance of private schools is once again in the news, following new research which shows that eight top UK schools, including my own secondary school St Paul’s, get as many pupils into Oxbridge as three-quarters of all schools and colleges together.

Cue yet another round of soul-searching about how to close the gap. Last year, the Sutton Trust proposed an “Open Access” scheme with subsidised places for low or medium income students. Others go on the offensive: the 2017 Labour manifesto declared the party would remove private schools’ VAT exemptions to fund free school meals for primary school children.

But haven’t we heard this all before? The cycle of outrage is endless, discussions about reform are constant – yet nothing changes. The entrenchment of privilege through education is as deep now as it ever was – we don’t need to recite the well-known figures about the domination of top professions by the privately educated to know that. It’s time to make the case for abolition.

There’s a reason outrage at these stories is so widespread: the injustice is blatant. You’re rich, you put your child in a private school, they have smaller class sizes, more resources and, hey presto, they get better results, better university places and better-paying jobs. Among the pupils themselves, intelligence is depicted as innate. Since an A grade was seen as the minimum requirement at St Paul’s, many come to believe this nonsense.

Rather, there are simply more provisions. To take one example, in my sixth-form years I attended weekly Oxbridge preparation classes; a semi-professional mock interview; and talks from “Old Boys” telling us how to game the Oxbridge application process. No wonder a quarter of pupils gained an Oxbridge place in 2016.

Ironically-named public schools like St Paul’s are the breeding ground of Britain’s ruling classes. During my time there I heard talks from leading politicians and influencers: MPs, cabinet ministers, think tank directors, even Prince Charles. Most of these speakers were brought in through personal connections among Britain’s incestuous elite. Even now, I regularly receive invites to ex-pupil drinks events where the rich and powerful make connections.

This bubble of governing power exists apart from society. We played sport against other schools, but only private and grammar ones. We socialised with other schools, but rarely with academies or comprehensives or sixth-form colleges. The characterisation of Britain’s education system as one of “social apartheid” couldn’t be more apt.

The upshot is an obscene culture of entitlement. On my first day at the school we were told that we were important because we would end up leading society, as executives, politicians, bankers. We were destined, in short, to rule.

Occasionally the implicit contempt for “the masses” would surface: one Friday afternoon, a particularly loathsome classmate openly expressed his disdain for state-educated people. I heard the word “plebs” on more than one occasion.

None of this is solved by a wider range of access to these schools, or by making tweaks to their taxation. The fundamentally oppressive structure of a two-tier schooling system is left undisturbed. Those who claim these schools’ bursary programmes create some sort of meritocracy would do well to consider that of over half a million pupils at independent schools, only 6,000 are on full bursaries.

Next comes the defence that these schools help the community. Leaving aside that community schemes are a prerequisite for their charitable status, it’s also untrue. St Paul’s “philanthropic” sharing of its swimming pool with local state schools is a drop in the ocean when you consider the school was the ideological training ground of austerity’s chief architect, George Osborne, whose policies cut schools funding, massively increased homelessness, and led to 120,000 excess deaths.

There is no tenable defence of private schools. So why is Labour’s response limited to a tax reform? The party’s success at the 2017 election was in large part down to its promised reinvigoration of public services and investment in communities. The National Education Service it proposed – cradle-to-grave learning free at the point of use – made waves. Universal provision and democratic accountability were on the table.

Private schools offer neither. Instead they serve to create an entitled elite cut off from a society they are told they deserve to rule. For as long as they exist, the supremacy of inherited wealth will reign in Britain.

Integration doesn’t mean a few lucky souls joining the gilded circles of power. It means ending an unequal distribution of resources and educating our youth collectively. Private schools’ playing fields, sports halls and state-of-the-art resources should belong to the community, not just the rich. By abolishing private schools, Labour would make a lasting and meaningful stride towards social justice, and lay the foundations for a fairer future.’

*The above article by Angus Satow was first published in the Guardian on Wednesday 12 December 2018.

Hard Brexiters have used confusion, delusion and lies  to prosecute their damaging fantasies.

David Cameron and George Osborne, a couple of posh boys trying to do grown-up men’s work, are failing miserably

A Path to Values-led Education for all 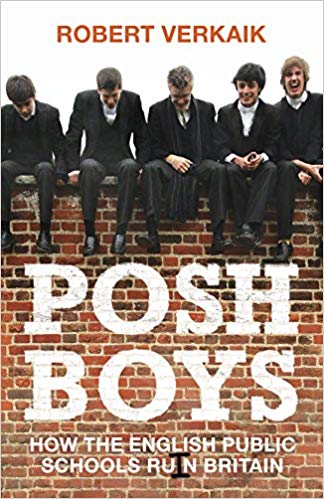 ‘Imagine a world where leaders are able to pass power directly to their children. These children are plucked from their nurseries and sent to beautiful compounds far away from all the other children. They are provided with all the teachers they need, the best facilities, doctors and food. Every day they are told this is because they are the brightest and most important children in the world.

Years later they are presented with the best jobs, the grandest houses and most of the money. Through their networks of friends and family they control the government, the courts, the army, the police and the country’s finances. They claim everyone is equal, that each person has a chance to become a leader. But this isn’t true.

If such a world existed today wouldn’t we say it was unfair, even corrupt?

With Posh Boys Robert Verkaik issues a searing indictment of the public school system and outlines how, through meaningful reform, we can finally make society fairer for all.’

...And finally, My Take on Britain

I am grateful for the opportunity to live in a country that encourages me to be who I am, what I am: An Englishman of Persian origin and heritage.