This is nothing, but a manifestation of a cruel and inhumane state of affairs

Homeless Children of ‘Great Britain’ growing up in Shipping Containers

Do you have an eye for justice and sense of duty? Then, these questions are for you 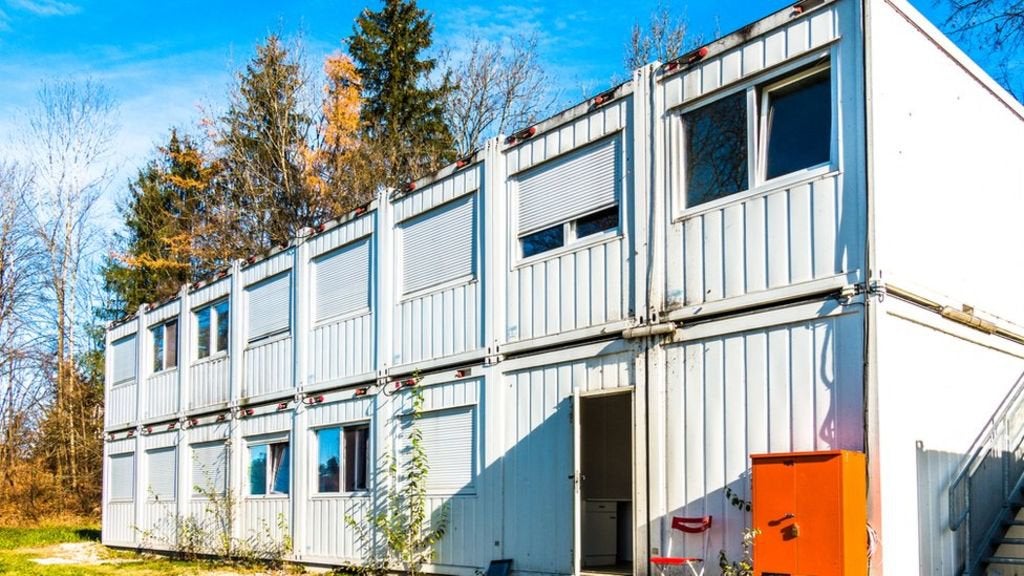 This, surely, must be, a lasting shame and scar on the conscience of Britain

'In Britain, the government’s ideological austerity agenda has contributed to plunging 4.1 million children into poverty. This means insecure accommodation, cold homes and not enough to eat – and young people absorb all of this stress. The anxiety of living like this should not be underestimated as a factor in the rise of self-harm behaviours. Worries about exams, university applications and job prospects all loom large too, particularly in a world where employment options are too often limited and precarious.'

A journey through a land of austerity, poverty and inequality: Welcome to Britain

The pertinent question is:

Where has the nation’s moral compass gone? Where is the outrage, disgust, anger and indignation about this inhumanity and abuse?

A country/nation drunk on market values, guided by cruel machinery of exploitation, racism, class division, austerity, cruelty, aggression, that humiliates it’s innocent, weak and vulnerable citizens, with neoliberalism, poverty, inequality and food banks and celebrates extreme individualism, feral competition, worship of mammon, rat-race to a success that it can never deliver and ignores the struggles and plight of its children and youth, ceases to be civilised and sooner or later ceases to exist morally or spiritually. 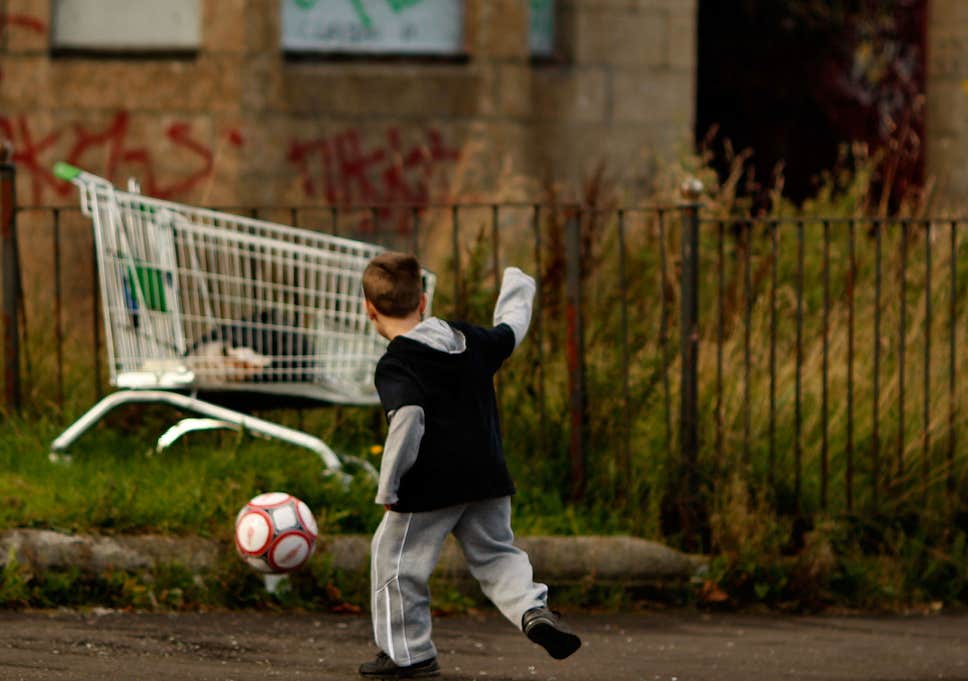 'Figures indicate child poverty in Manchester and Birmingham stands at 44 per cent and 43 per cent respectively, while in the London borough of Tower Hamlets this reaches 53 per cent'

Almost half of all children in some UK cities are estimated to be living in poverty, new figures reveal, amid warnings that welfare reforms are leading to an “emerging child poverty crisis”.- Photo: independent.co.uk

‘Thousands of homeless children are growing up in cheaply converted shipping containers and cramped rooms in former office blocks, putting their health and wellbeing at serious risk, according to the children’s commissioner for England.

Anne Longfield said it was a scandal that at least 210,000 young people in homeless families in England were put up by councils in temporary housing and bed and breakfasts or forced to “sofa surf” with friends, often for long periods.

Such accommodation could be unsafe, disruptive and overcrowded, with no room for children to play or do homework. It was frequently in poor condition, far from family support networks and schools, and often in isolated locations dogged by crime or antisocial behaviour.

“Something has gone very wrong with our housing system when children are growing up in B&Bs, shipping containers and old office blocks,” said Longfield. “It is a scandal that a country as prosperous as ours is leaving tens of thousands of families in temporary accommodation for long periods of time, or to sofa surf.”

Launching a report on family homelessness, she said the main causes were a lack of affordable housing and financial instability created by welfare changes, cuts to universal credit and a four-year freeze on housing benefit.

The report cites the case of Lucy, a homeless woman in her early 20s, and her two-year-old son, who were placed in a converted office block an hour away from their local area in London. The room had no basic furniture. Supposedly an emergency placement, they ended up staying for 11 months.

“They put me in a small room in an office block which had been converted into flats. It was in an industrial estate in the middle of nowhere. The cars and lorries would whizz round really fast. It was very noisy and it felt unsafe to walk to the shops,” Lucy said.

The NSPCC said such conditions were harmful to children. “These descriptions of pokey, dangerous conditions belong in a Dickensian novel, but instead they paint a picture of life in the 21st century for many families,” said the charity’s head of policy, Almudena Lara.

The report says one in 10 new homes created in England and Wales since 2016 are in former office blocks, rising to more than half in hotspots such as Harlow in Essex. A government rule change in 2013 means such developments no longer have to seek planning permission. Councils have called for the rule to be revoked.

Many of the conversions fail to meet official size standards for a one-bedroom home, which is 37 square metres. The report cites single-room flats of 18 sq metres converted from offices, and one of 13 sq metres – barely larger than a parking space.

Office-block conversions are often located on or near industrial estates, far from shops, schools and other amenities. Some children who live in them are reportedly stigmatised by peers as “office-block kids”.

Converted shipping containers are increasingly used by councils to provide temporary accommodation for homeless families. While some families prefer them to B&Bs because they have their own self-contained bathroom and kitchen, they are regarded as too hot in summer and too cold in winter.

The report says 124,000 homeless children were recorded as living in temporary accommodation in England at the end of 2018, an 80% increase since 2010. On top of this, it calculates there were 92,000 homeless young people in families who sofa surfed with friends or relatives.

These estimates do not include a further group of children who have been placed in temporary housing by social services, for which there is no publicly available official data. Of those young people in temporary homes in 2017, more than half had been there for longer than six months, and one in 20 for more than a year.

The report says an estimated further 375,000 children live in households that have fallen behind on rent or mortgage payments, putting them at risk of becoming homeless.

The latest official statistics show 2,420 families were living in B&Bs in December 2018, a third of whom had been kept there for longer than six weeks, in breach of the law. These figures do not count at least 1,641 families in council-owned B&Bs, which are not included in official data.

The Local Government Association said a severe lack of social rented homes in which to house families meant councils had no choice but to place households into temporary accommodation including B&Bs.’-Homeless children put up in shipping containers, report says

Bleak houses: Tackling the crisis of family homelessness in England 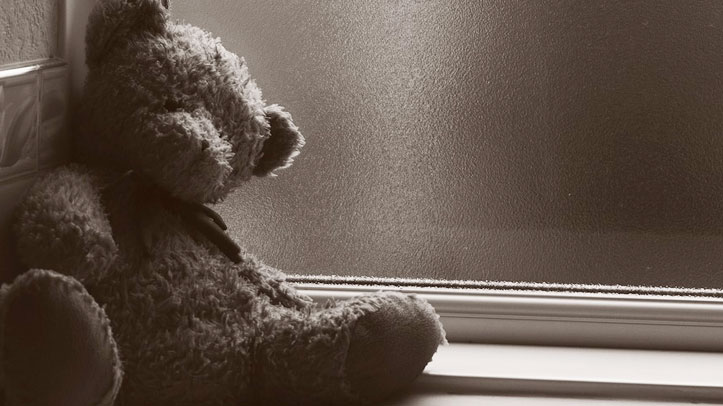 Growing up in a stable, healthy and secure home is so important for any child. Yet we know there are thousands of children in England who are living in homeless families, stuck in poor quality temporary accommodation, often with low prospects of finding something permanent. There are many others who are at risk of ending up homeless.

This report shines a light on this homelessness crisis and shares the experiences of some of those children.

Earlier this year, we visited children and families living in temporary accommodation, and spoke with them and some of the frontline professionals who work with them. We also carried out new data analysis to identify the scale of the problems.

Do you have an eye for justice and sense of duty? Then, these questions are for you