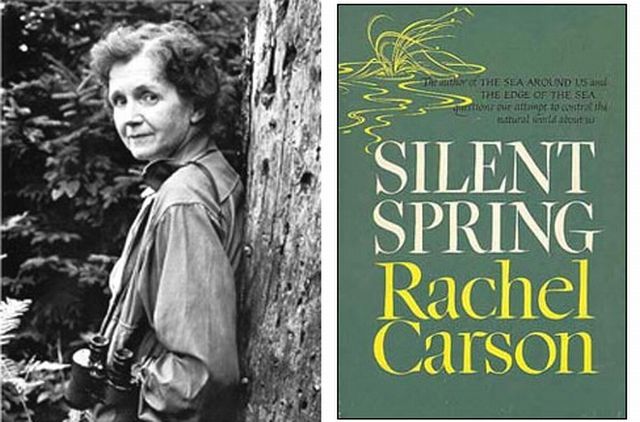 '2012 marks the Fiftieth anniversary of the environmental classic, Silent Spring by Rachel Carson, so how shall we celebrate?  Only five short years ago, it looked as if climate change, impending mass species extinction, habitat loss, mercury contamination, a sea of plastic, and a host of other environmental crises were about to be dealt with, if not in significant and dramatic ways, well then at least in marginal and incremental ways which would in turn create momentum for more substantial changes.  Climate change was acknowledged by sizable majorities in nation after nation, even the USA.  If those trends had continued we could have heralded 2012 as the fiftieth anniversary of Silent Spring in a spirit of celebration.  What a difference the past five years have made, as even marginal and incremental changes have either been more meager than hoped, or not made at all, or even reversed.

'The global financial and economic crisis has rendered people across the globe, economically insecure.  It is certainly possible to build an economic system, where employment and sustenance is not dependent upon economic growth.  But, that is not the system which exists.  And so the financial and economic crisis led to recession, and recession has led to increased unemployment and economic insecurity.  And those who live in an economy where economic security is coupled with economic growth, who then are rendered economically insecure, turn their backs on other concerns such as the environment.  Public opinion is then easily manipulated by those who claim that saving the environment will hurt the economy or cost jobs.

'The chemical industry is today more powerful, dangerous, and cunning than ever, from the fields of California to Bhopal, to climate change, to honey bee colony collapse, even to commemorating Silent Spring.  I might not have so noticed the 50th anniversary of Rachel Carson’s seminal work had it not been for a “gift” from a student.  A few weeks prior to the end of the school year, one of my students gave me a publication called Silent Spring at 50: Reflections on an Environmental Classic by Meiners and Morriss.  I tucked it away and planned to read it basking in the glory and admiration for Rachel Carson while working out one day on the elliptical machine, after the summer recess was well underway.  Much to my horror I discovered that what I expected to be a work in admiration for Rachel Carson was instead a well- polished and expensive publication financed by right wing think tanks, the chemical industry and agri-business.  The purpose of the publication was to trash the scholarship of Rachel Carson.  The chemical industry, agri-business and their enablers have not given up and are more powerful, destructively dangerous to the earth and the fabric of life (nothing grows across wide swaths of land but for their bio-engineered products), even as they are more cunning and cleverly deceptive in their marketing and their lobbying efforts.

'The publication begins with the dubious claim, oftentimes repeated, that the legacy of Silent Spring is responsible for millions of deaths in Africa and Asia, due to what is referred to as ‘campaigns against DDT use’, even though the use of DDT has never been banned  in anti-malarial efforts.  It goes on to refer to human population control and concerns over technological change, particularly when the precautionary principle is invoked, as a “dark tradition”.

'One of the key points of this publication is that chemical fertilizers and pesticides together with bio engineered crops which allow for no-till farming result in higher yields per acre.  This in turn is claimed to result in more land left over for wildlife and less soil erosion.  Yet problems with this argument are abundant.  Among the problems, being able to feed more and more people, more cheaply, doesn’t mean a higher quality of life or good health or better more nutritious food.   More people on the planet in turn doesn’t mean more habitat, nor does greater yield necessarily lead to less cultivation of land and more habitat, both with people eating more and hence the problem of obesity, and  with more crops being used for non-food purposes including  bio-fuels and clothing.  Over the past fifty years habitat loss has continued as have increasing threats to bio-diversity as well as climate change.  Mechanized agriculture with its heavy use of chemical pesticides and fertilizers and carbon emissions, as well as the introduction of bio-technology has and is playing a role in all of these environmental crises.

'The publication claims that Rachel Carson was quite wrong to identify declining birth rates in various species of birds and making the connection to DDT and other pesticides. The publication cites numbers exclusively form Audoban’s Christmas Bird Count (not birth rates but total numbers) to supposedly refute her work.  Meiners and Morriss cherry pick the data but also pay scant attention to ceteris paribus assumptions.  They claim that Rachel Carson was not systematic in her approach to the data but offer no systematic approach of their own such as at minimum, a model of multi-linear regression.

'Fifty years after he marched from Selma to Montgomery, Martin Luther King Jr. had achieved a national holiday in his honor, even as the civil rights movement grew and grew, and continues to be extended to new areas such as rights for same sex couples.  Fifty years after Mahatma Gandhi led a campaign for Indian independence from the British he is regarded as a hero and holy man internationally and nationally even as Indian democracy thrives and grows.  Fifty years after she wrote Silent Spring, Rachel Carson is still being vilified by the same groups, and corporations who tried to trash her reputation back in 1962, even as the environmental movement has stalled in its ability to affect change for the better.   Of course much remains to deepen democracy and civil rights throughout the world and in the United States as well, but the environmental movement really has not enjoyed as much success.

'Sure there were some important victories in the early years after Silent Spring such as the Clean Air Act and Clean Water Act, the creation of the EPA in the United States, with similar agencies created in many countries around the globe.  And sure the Obama Administration recently raised fuel economy standards.  But compared to what needs to be done to safeguard the environment, prevent mass extinctions, and check global warming, the environmental movement has stalled.  Rachel Carson has not as yet been awarded her rightful place of honor, nor do the environment and other species have their rightful place at the policy discussion table.  If the chemical industry, agri-business, and their enablers have their way, Rachel Carson and the environment will never have their due.  While it would be nice to celebrate fifty years after Silent Spring with accolades for Rachel Carson, and in being able to point with pride to all manner of developments to protect the environment, preserve biodiversity, check carbon emissions, and to safeguard critical habitat, and to draw the origin for those accomplishments back to Rachel Carson, that is not reality.  We do not have enough in the way of environmental accomplishments to truly celebrate.  Instead if we want to honor Rachel Carson, and she truly deserves honor, it is time to get to work, and get to work rather urgently.'- Steve Szeghi* 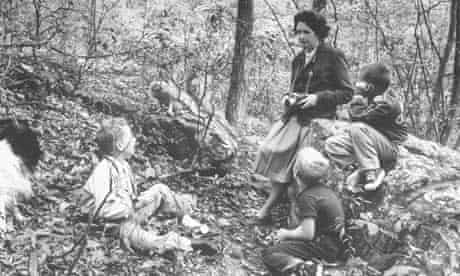 Rachel Carson in woods near her Maryland home in 1962, the year in which Silent Spring was published.

Birds were dying everywhere..'Several causes were proposed – poisons, viruses or other disease agents – but no one had a definitive answer or seemed sure of the cause – with one exception: the biologist Rachel Carson. For most of 1961, she had locked herself in her cottage in Colesville, Maryland, to complete her book, Silent Spring. It would provide an unequivocal identification of the bird killers. Powerful synthetic insecticides such as DDT were poisoning food chains, from insects upwards...'-Rachel Carson and the legacy of Silent Spring

KAMRAN MOFID’s Blog: Dedicated to the Common Good- aiming to be a source of hope and inspiration; enabling us all to move from despair to hope; darkness to light and competition to cooperation. “Whatever you can do or dream you can, begin it. Boldness has genius, power, and magic in it”. —Johann Wolfgang von Goethe

KAMRAN MOFID’s BLOG GUEST BLOG: Here on The Guest Blog you’ll find commentary, analysis, insight and at times provocation from some of the world’s influential and spiritual thought leaders as they weigh in on critical questions about the state of the world, the emerging societal issues, the dominant economic logic, globalisation, money, markets, sustainability, environment, media, the youth, the purpose of business and economic life, the crucial role of leadership, and the challenges facing economic, business and management education, and more.