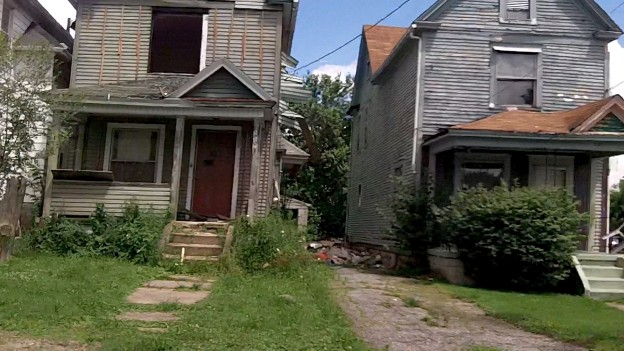 “Youngstown, Ohio, was once a thriving steel centre. Now, the industry has all gone and the city is full of abandoned homes and businesses. ”

Thirty years ago, the old deal that held US society together started to unwind, with social cohesion sacrificed to greed. It is no wonder that more and more Americans believe the game is rigged. It is no wonder that they buy houses they cannot afford and then walk away from the mortgage when they can no longer pay. Once the social contract is shredded, once the deal is off, only suckers still play by the rules.

“In or around 1978, America's character changed. For almost half a century, the United States had been a relatively egalitarian, secure, middle-class democracy, with structures in place that supported the aspirations of ordinary people. You might call it the period of the Roosevelt Republic. Wars, strikes, racial tensions and youth rebellion all roiled national life, but a basic deal among Americans still held, in belief if not always in fact: work hard, follow the rules, educate your children, and you will be rewarded, not just with a decent life and the prospect of a better one for your kids, but with recognition from society, a place at the table… The Roosevelt Republic had plenty of injustice, but it also had the power of self-correction.

Americans were no less greedy, ignorant, selfish and violent then than they are today, and no more generous, fair-minded and idealistic. But the institutions of American democracy, stronger than the excesses of individuals, were usually able to contain and channel them to more useful ends.”

But, the above was the case untill America went on a different path, neo-liberalism, powered by greed.

“In Youngstown, Ohio, the steel mills that had been the city's foundation for a century closed, one after another, with breathtaking speed, taking 50,000 jobs from a small industrial river valley, leaving nothing to replace them. In Cupertino, California, the Apple Computer Company released the first popular personal computer, the Apple II. Across California, voters passed Proposition 13, launching a tax revolt that began the erosion of public funding for what had been the country's best school system. In Washington, corporations organised themselves into a powerful lobby that spent millions of dollars to defeat the kind of labour and consumer bills they had once accepted as part of the social contract. Newt Gingrich came to Congress as a conservative Republican with the singular ambition to tear it down and build his own and his party's power on the rubble. On Wall Street, Salomon Brothers pioneered a new financial product called mortgage-backed securities, and then became the first investment bank to go public.

The large currents of the past generation – deindustrialisation, the flattening of average wages, the financialisation of the economy, income inequality, the growth of information technology, the flood of money into Washington, the rise of the political right – all had their origins in the late 70s. The US became more entrepreneurial and less bureaucratic, more individualistic and less communitarian, more free and less equal, more tolerant and less fair. Banking and technology, concentrated on the coasts, turned into engines of wealth, replacing the world of stuff with the world of bits, but without creating broad prosperity, while the heartland hollowed out. The institutions that had been the foundation of middle-class democracy, from public schools and secure jobs to flourishing newspapers and functioning legislatures, were set on the course of a long decline…”