The Inspiring Story of a Giant Sequoia (Mammoth Tree) of California

Today (27 June 2013) marks the 160th anniversary of a seminal, but largely forgotten

moment in the history of the conservation movement. 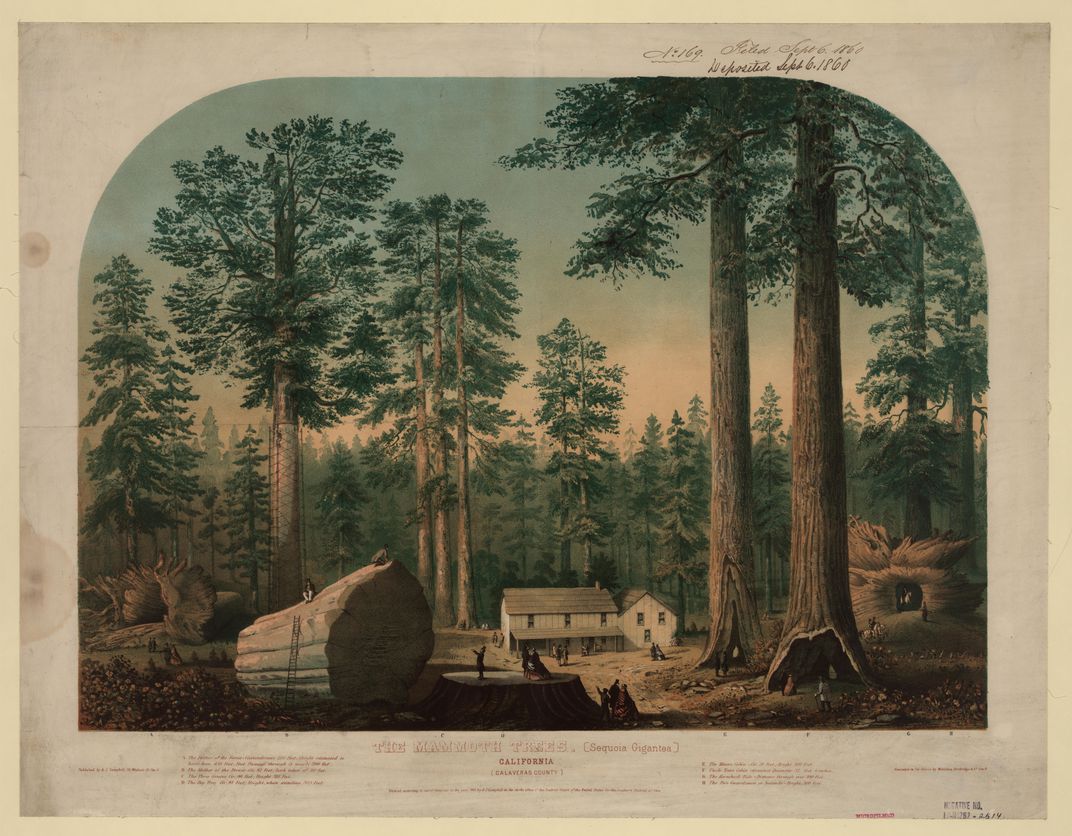 'In the winter of 1852, while chasing a wounded grizzly bear in the mountains of eastern California, a hunter named Augustus T. Dowd encountered a very large tree. It had red-orange bark and clouds of sea-green needles, and it would’ve taken more than a dozen men with outstretched arms to encircle it.

When Dowd told his campmates what he’d found, they laughed. Then he took them to see the tree.Newspapers trumpeted the discovery, calling the find—long known to Native Americans—“the Sylvan Mastodon” and “the Vegetable Monster.” Soon, another group of men returned to Dowd’s tree and, perhaps inevitably, cut it down. Everybody counted the rings on the felled trunk differently—one reporter estimated it to be 2,500 years old, another 4,000 and a third 6,500. “It must have been a little plant when Samson was slaying the Philistines,” one wrote...'-Continue to read Photo:Smithsonian Magazine 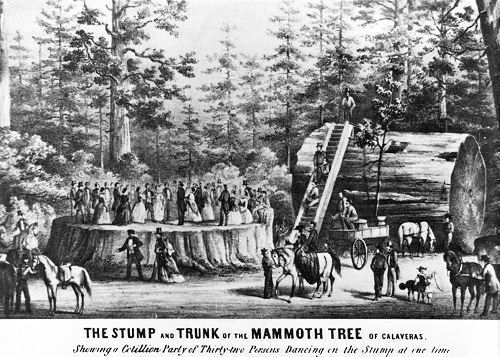 'The old sequoia first seen by Augustus T. Dowd, was named "The Discovery Tree". After withstanding storms and forest fires for many centuries, in 1852 the tree encountered a western man. A year later the tree was felled...
It took five men and 22 days (sketch on the left) and after counting the tree rings it appeared that this tree was 1300 years old. The remaining stump was used as a dance floor..'-Text and Photo: History of the giant sequoia

'160 years ago a giant sequoia in California was cut down, becoming the inspiration for the national park system.'

'On Monday, 27 June, 1853, a giant sequoia – one of the natural world's most awe-inspiring sights - was brought to the ground by a band of gold-rush speculators in Calaveras county, California. It had taken the men three weeks to cut through the base of the 300ft-tall, 1,244-year-old tree, but finally it fell to the forest floor.

A section of the bark from the "Mammoth Tree", as newspapers soon described it, had already been removed and was sent to San Francisco to be put on display. The species had only been "discovered" (local Native American tribes such as the Miwok had known of the trees for centuries) that spring by a hunter who stumbled upon the pristine grove in the foothills of the Sierra Nevada whilst chasing an injured bear. Word of the discovery quickly spread.

In the age of PT Barnum's freak shows, the speculators, mostly gold miners, had sensed a commercial opportunity. The section of bark – re-erected using scaffold, with a piano inside to entertain paying visitors - would later be sent to Broadway in New York, as would the bark from a second tree felled a year later. The bark of the "Mother of the Forest" – as the second tree was named – would even go on to be displayed at London's Crystal Palace causing great excitement and wonder in Victorian England before it was destroyed by fire on 30 December 1866. (The bark of the original mammoth tree was also lost to fire as it lay in storage in New York in 1855. A fitting end, perhaps, as fire plays such a crucial role in the life cycle of giant sequoias.)

“To our mind it seems a cruel idea, a perfect desecration, to cut down such a splendid tree…In Europe, such a natural production would have been cherished and protected, if necessary, by law; but in this money-making, go-ahead community, thirty or forty thousand dollars are paid for it, and the purchaser chops it down, and ships it off for a shilling show! We hope that no one will conceive the idea of purchasing the Niagara Falls with the same purpose!...But, seriously, what in the world could have possessed any mortal to embark in such speculation with this mountain of wood? In its natural condition, rearing its majestic head towards heaven, and waving in all its native vigour, strength and verdure, it was a sight worth a pilgrimage to see; but now, alas, It is only a monument of the cupidity of those who have destroyed all there was of interest connected with it.”…-Continue to read 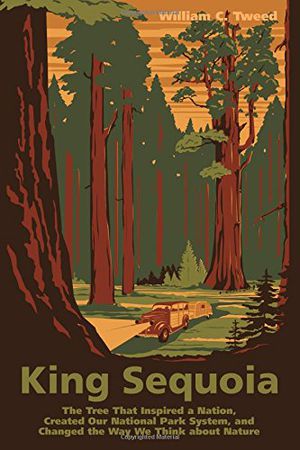 'From a towering tree, one of California's preeminent naturalists unspools a history that echoes across generations and continents. Former park ranger William C. Tweed takes readers on a tour of the Big Trees in a narrative that travels deep into the Sierras, around the West, and all the way to New Zealand; and in doing so he explores the American public's evolving relationship with sequoias. It comes as no surprise that the groves in Yosemite and Calaveras were early tourist destinations, as this species that predated Christ and loomed over all the world's other trees was the embodiment of California's superlative, almost unbelievable appeal. When sequoias were threatened by logging interests, the feelings of horror that this desecration evoked in people catalyzed protection efforts; in a very direct way, this species inspired the Park Idea. And sequoias' influence doesn't end there: as science evolved to consider landscapes more holistically, sequoias were once again at the heart of this attitudinal shift. Featuring an entrancing cast of adventurers, researchers, politicians, and environmentalists, King Sequoia reveals how one tree species has transformed Americans' connection to the natural world.'