"Once Allende comes to power we shall do all within our power to condemn Chile and the Chileans to utmost deprivation and poverty."-

Edward Korry, the US ambassador in Santiago, reporting to Henry Kissinger, the foreign strategist of President Richard Nixon

"One in 10 chance perhaps, but save Chile! /worth spending /not concerned risks involved /no involvement of embassy /$10,000,000 available,

more if necessary/ best men we have/ game plan/ make the economy scream /48 hours for plan of action."-Richard Helms, director of the CIA

Since 2001, September 11th has become solely represented by the destruction of the twin towers in New York City and the beginning of America’s “War on Terror”. However, before 2001, there was another 9/11. In 1973, a military coup backed by the United States, overthrew the Chilean government and ushered in seventeen years of brutal dictatorship. Thousands of people were killed and disappeared; thousands more were arrested and tortured. That day marked the end of one of Latin America’s longest democratic traditions, and brought on almost two decades of murder, disappearances, repression, and fear.

This is not a history lesson to diminish the memory of those who died in the Twin Towers, the Pentagon and Flight 93, but to honour the lives that were lost under a brutal regime propped up by the U.S. government. There is no ownership over a date, and past tragedies cannot be paved over by newer ones, not as long as we can still remember them.) 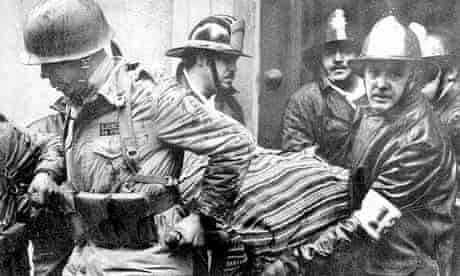 The body of Salvador Allende is carried from the destroyed presidential palace of La Moneda, Santiago on 11 September 1973,

during the military coup headed by General Pinochet. Photo: El Mercurio/AP/Via The Guardian

On 9/11, 1973 the democratically elected socialist president, Salvador Allende, was ousted by a CIA-backed military junta, ending 48 years of democratic rule and ushering in a brutal military dictatorship led by General Augusto Pinochet.

Under Pinochet's reign, thousands were imprisoned, tortured, murdered and disappeared in an attempt to crush all political opposition. A Chilean commission investigating human rights abuses, estimated that there were over 40,000 victims of the military regime, 3,000 of whom were killed or disappeared, the BBC reported.

Pinochet received the support of the U.S. government because he embraced economic policies that favoured U.S. interests, such as privatising national industries and allowing American corporations to come in and reap massive profits, while only enriching an elite few in Chile and leaving the majority of people without social safety nets, labour rights or economic security.

Allende had dared to stand up to the neo-liberal economic model prescribed to developing countries around the world by the U.S. government via corporate-funded economists who envisioned these countries as new markets to be exploited for profit rather than actually developed. Allende wanted the Chilean people to benefit from the wealth of its national industries and natural resources, and for this he became a pariah in the eyes of the U.S.

Lest we forget: Western leaders, such as Thatcher are not just terrorist

sympathisers, but close friends with them!! 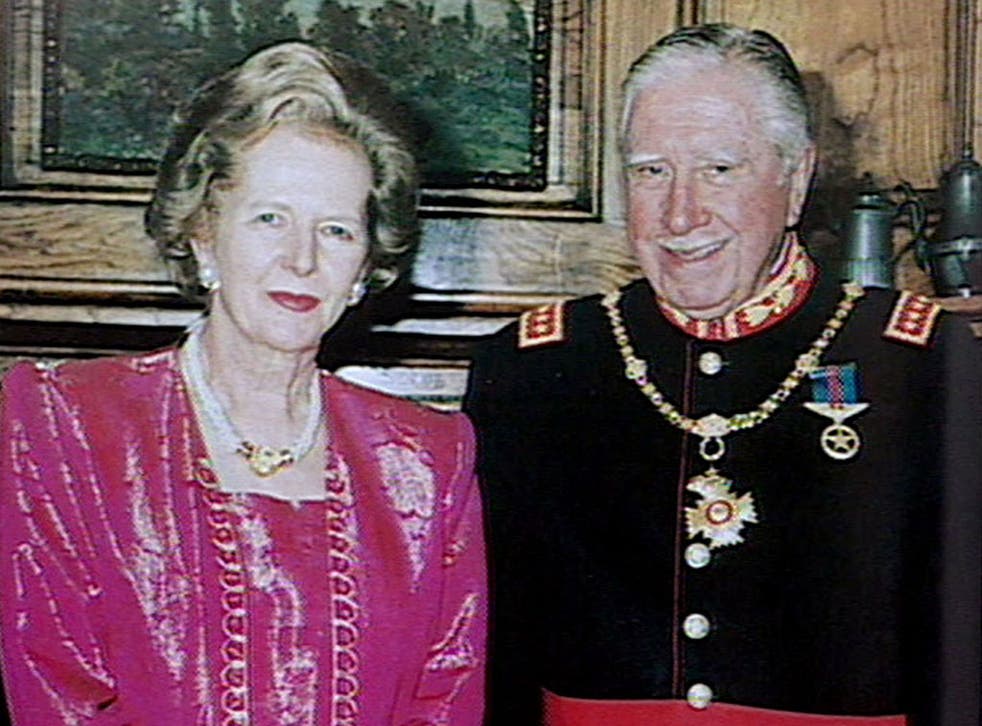 Life under Pinochet: “They were taking turns to electrocute us one after the other”

The time has come to send home the butcher of Chile

The U.S. had engaged in a campaign of economic sabotage, using financial institutions to isolate Chile while Allende was in power. Failing to coerce his capitulation, it encouraged Pinochet to take over. Once Pinochet was in power, the financial tap was turned back on.

The Pinochet regime did not maintain power because its economic policies were successful, but because it ruled through oppression and with the economic backing of the U.S.

For a better understanding of the coup and its destructive and inhumane consequences, below I have copied an article by Baltasar Garzón, which was originally published in the Guardian.

Baltasar Garzón is a Spanish jurist who formerly served on Spain's central criminal court, the Audiencia Nacional. He is best known for his spectacular coup in securing the arrest of Augusto Pinochet in 1998 in London.

Forty years after the bloody US-backed coup, it is Salvador Allende's vision of peace, justice and solidarity that has prevailed

“Before 2001, 11 September was universally identified as the date of another attack on democracy: the day, precisely four decades ago, when Augusto Pinochet ended hope of a progressive, socialist and pacifist democracy in Latin America, by leading a bloody military coup in Chile.

The brutal attack on the citizenry of the small nation entailed a sustained period of violence during which Pinochet's regime employed torture, disappearances, and the systematic and selective death of thousands of people – all the while touting messages of reform and progress.

By contrast, the attacks of 2001 were an indiscriminate massacre by foreign terrorists, and America's response was as swift and powerful as one might expect from the world's most potent military superpower. The message was clear: actions against the US have dire consequences.

But the reactive "war on terror" has had many consequences of its own, ushering in an era of great restriction on rights and civil liberties, and making commonplace the use of torture, renditions, and other perverse tactics. Far from contributing to safety, these actions have jeopardized the manifold achievements in international human rights laws and norms from the last century that serve to protect the global public.

This same two-dimensional mentality was evident 40 years ago in the US government's support of the Chilean coup d'etat. Salvador Allende was brought to power with the vision of an inclusive and egalitarian democracy in Chile, one that would fight against social inequality, poverty, and wealth disparity. His overthrow was co-ordinated by those who feared his socialist ideals above all. Their preferred alternative was a violent dictatorship, driven by economic interests, and an expansionist ideology that favoured militarism and fascism.

For two decades, Chile's authoritarian rule dashed the hopes of the millions who had supported Allende's vision, through repression, a complete lack of justice and accountability, and the relentless persecution of pro-democracy advocates. Yet, throughout the reign of terror, Chilean human rights advocates persisted, and resisted, pressing the international judicial community to act in accordance with their responsibilities to uphold the rights of the people, to stop standing idly by in the face of injustice.

Their dedication came with heavy costs, but it did eventually pay off. In 1998, Augusto Pinochet was arrested in London on charges of genocide, torture and terrorism against his people. When he was returned to Chile, new investigations began there, as well.

And as became clear to the world during the course of the investigations, the US-backed dictator had broken every possible ethical code. In addition to his violent criminality, he was an economic predator as well, having used his mandate and position to launder tens of millions of dollars into secret bank accounts in the US while many thousands of Chileans suffered from poverty.

While it is true that death got to Pinochet before the judicial system could deliver true justice, it was also clear that Pinochet had already been tried and convicted as a traitor of the people long before his passing. In addition, the Riggs bank, which had aided Pinochet's illegal dealings, suffered a penalty, and a significant compensation for the victims was made through the Salvador Allende Foundation. It was through these legal channels that democracy triumphed against terror.

In the wake of these historical shifts, and facing its own terror problem, the American political machine still remains, in many respects, fixated in its cold war mentality. The CIA no longer runs amok in South America, yet the US is still trying to influence and control sovereign nations in Latin America: American "soft power" may be more subtle than the crude subversion that sank the entire continent into internal conflict and military repression throughout the 1970s and 80s, but the imperialist mindset remains.

This same mentality that gave us the disastrous interventions in Iraq and Afghanistan also now continues with the drone strikes in Pakistan and Yemen – which fly in the face of international legal norms. And finally, we see the United States still wedded to cold war doctrines of state secrecy and surveillance in its persecution of whistleblowers like Chelsea Manning and Edward Snowden, and its spying on the communications of foreign citizens and governments.

And as the security state tightens its grip, the war purportedly waged in defence of democracy now finds itself as the foremost contributor to the erosion of democratic ideals. Rather than learn from the example of the Chilean struggle, and accept its responsibility for the suffering it brought, America's warmongering, and its many violations of international law, fly in the face of the hard-fought victories of Chile's victims and their supporters.

As we approach 40 years since the devastating events in Chile, and a dozen since the horrific attacks of 2001, we must remember that to truly honour the memory of all those who lost their lives in the fight for democracy, we must uphold the principles of freedom and equality that democracy represents.

Facing his certain death, President Allende said, in his final address to the Chilean people:

"Go forward knowing that sooner rather than later, the great avenues will open again where free men will walk to build a better society.

The time to build that better society is now.” 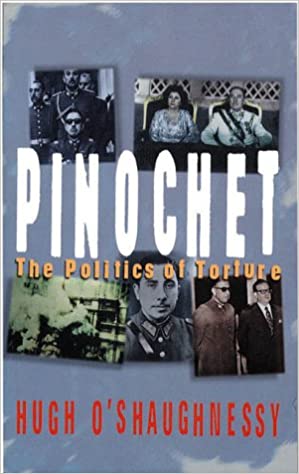 'Using interviews, eye-witness accounts and quotes from sources on Pinochet, this volume tracks the General's journey from his rise to power in 1973 to his unprecedented arrest and internment in Britain in October 1998. It contains revelations about the financial dealings of the Pinochet regime, and presents evidence of arms and drug-running. It details the assassination operations carried out by Chile's state security apparatus, the DINA, against three Chileans abroad which resulted in the murder of four individuals. The book highlights the consequences of his arrest in terms of international law, and tells the story of legal intrigue behind the search for justice. Moreover, it provides an analysis of Pinochet's role in building modern Chile and in the politics of torture.'-AMAZON