Moving from moral to legal wrong

Polly and I first met at the Astana Forum a few years back. It was there that we discovered that as well as sharing many ideas and visions, we also have another common bond, namely, our books have been published by the same publisher, Shepheard-Walwyn, London.

She deserves all our acknowledgement and support. In this blog posting, by reprinting her letter: “Moving from moral to legal wrong” I would like to introduce Polly more fully to our GCGI Family.

When do laws no longer work? When our laws protect greed and not the greater good of society as a whole. Most laws, in particular at an international level, are often drafted without an enforceability mechanism (such as the creation of a crime or by putting in place powers to prohibit the harm). As a result, society suffers.

There's a maxim in law: when “malum in se” becomes “malum prohibita” – when something is wrong in itself, it becomes a prohibited wrong. Thus, we make what society perceives to be a moral wrong, a crime. When we perceive an action (or the failure to take action) to be against the interests of our communities, or to be causing injury, societal disapproval can reach such a level that the only way forward is to break a law to make a law.

What does that mean? It’s what many people across the world are now doing; people who care are standing up to give voice to a greater harm - yet, they end up being arrested for obstructing the harm. What is really playing out is often a gross injustice. The moral harm – because it is not a legal harm – continues and escalates. Quite simply it is not a crime to cause signicant harm, unless the harm is in a limited context – and this is because law that prohibits the moral wrong does not yet exist.

Another way of expressing intent to end a given harm is to impute a system of accountability. But again we have the trumping of greed, and not the greater good of society as a whole, due to the lack of criminality. Setting standards that are voluntary, even putting in place laws that allow the injured party to litigate for damages has completely failed to bring to an end some of the worst corporate practises in the world. How can this be? Very simply really – there is no corporate crime to hold to account in a criminal court of law those individuals who make decisions that result in significant harm.

A crime, unlike a breach of a civil law or an international agreement, is an action or omission that constitutes an offence that the state must prosecute and is punishable by a criminal court of law.

But what happens when our states are complicit in a harm? What happens when laws are put in place by the state that go against the greater good of society as a whole? Can it be right that a government, a corporation or an organisation can assert their silent right to cause harm? Often it is said that either the harm does not exist or that it will drive the economy forward. Neither, it has to be said, are defences in criminal law.

So here is our state of play today: treaties, conventions, protocols, trade agreements and civil law have all been unable to prohibit mass damage and destruction or loss of ecosystems. Quite simply, that is because it is not a crime.

Maybe just maybe our sense of what is right and what is wrong in a global context is now becoming clearer; closing the gate to significant harm is the inevitable next step. 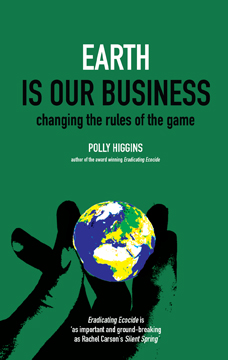