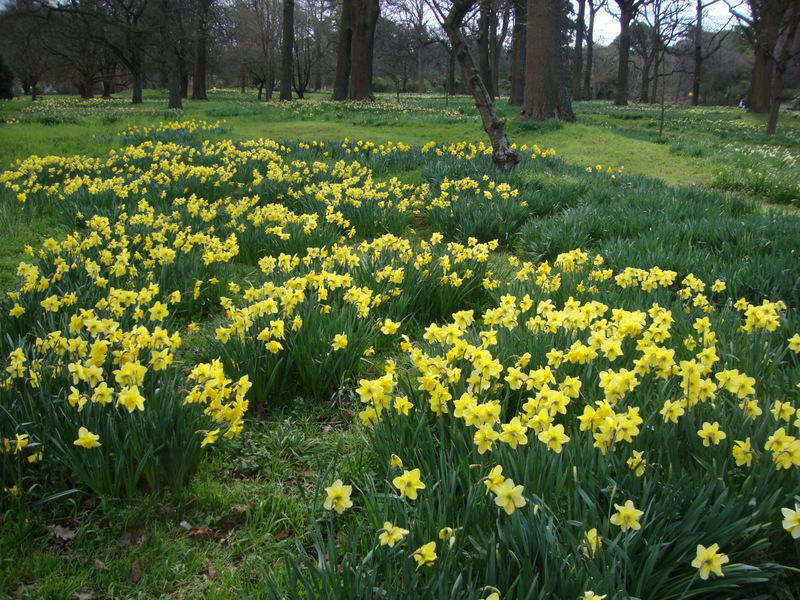 Flowers are blooming, birds are singing, the days are getting brighter. What better way to sing the praises of Spring’s arrival than to read beautiful poetry.

Here are two poems I would like to share with you: One from Hopkins and the other from Wordsworth.

Gerard Manley Hopkins : The Poetry Foundation is one of the three or four greatest poets of the Victorian era. He is regarded by different readers as the greatest Victorian poet of religion, of nature, or of melancholy. However, because his style was so radically different from that of his contemporaries, his best poems were not accepted for publication during his lifetime, and his achievement was not fully recognized until after World War I.

‘Hopkins begins, “Nothing is so beautiful as spring.” If there is anything more beautiful, it is this poem. It has a heightened, rapturous and intoxicated quality: “The glassy pear tree leaves and blooms, they brush / the descending blue; that blue is all in a rush / with richness; the racing lambs too have fair their fling.” On a spring morning it is a poem one can recite that makes spring seem more intensely itself: even the lambs have been partying, and how that hallucinogenic “glassy” carries the line forward, unexpectedly filling it with light.’

Nothing is so beautiful as Spring –

When weeds, in wheels, shoot long and lovely and lush;

Through the echoing timber does so rinse and wring

The ear, it strikes like lightnings to hear him sing;

The glassy peartree leaves and blooms, they brush

The descending blue; that blue is all in a rush

With richness; the racing lambs too have fair their fling.

A strain of the earth’s sweet being in the beginning

In Eden garden. – Have, get, before it cloy,

Before it cloud, Christ, lord, and sour with sinning,

Innocent mind and Mayday in girl and boy,

Most, O maid’s child, thy choice and worthy the winning. 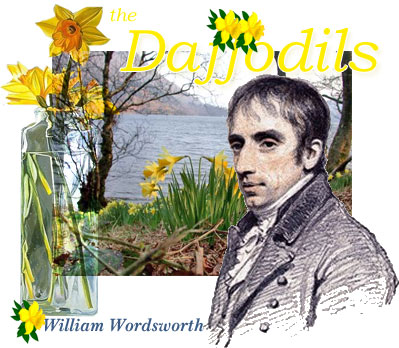 Of all the famous poems of Wordsworth, none is more famous than "I Wandered Lonely as a Cloud".

In this poem, Wordsworth says that, wandering like a cloud floating above hills and valleys, he encountered a field of daffodils beside a lake. The dancing, fluttering flowers stretched endlessly along the shore, and though the waves of the lake danced beside the flowers, the daffodils outdid the water in glee. He says that a poet could not help but be happy in such a joyful company of flowers. He says that he stared and stared, but did not realize what wealth the scene would bring him. For now, whenever he feels “vacant” or “pensive,” the memory flashes upon “that inward eye / That is the bliss of solitude,” and his heart fills with pleasure, “and dances with the daffodils.”

I Wandered Lonely as a Cloud

I wandered lonely as a cloud

That floats on high o'er vales and hills,

When all at once I saw a crowd,

A host, of golden daffodils;

Beside the lake, beneath the trees,

Fluttering and dancing in the breeze.

Continuous as the stars that shine

And twinkle on the milky way,

They stretched in never-ending line

Along the margin of a bay:

Ten thousand saw I at a glance,

Tossing their heads in sprightly dance.

The waves beside them danced; but they

Out-did the sparkling waves in glee:

A poet could not but be gay,

In such a jocund company:

What wealth the show to me had brought:

For oft, when on my couch I lie

In vacant or in pensive mood,

They flash upon that inward eye

Which is the bliss of solitude;

And then my heart with pleasure fills,

And dances with the daffodils.

The 10 best poems about spring | Culture | The Observer