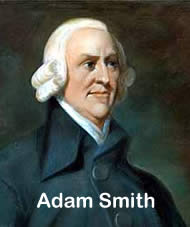 There is no doubt that today capitalism is under fire. It is besieged and under attack. To my mind this is the best time to revisit Adam Smith and to try to see if we can locate the true and real Smith. As what has been mainly known about Adam Smith and ascribed to him, are far from the truth. The right-wingers and the market-fundamentalists for too long have abused Smith in order to promote their obnoxious agenda and to legitimise exploitation of people and resources for the benefit of the 1%.

In the interest of accountability to truth and to Smith himself, this must be challenged and attempts must be made to discover the real Adam Smith and his true values.

To prove my statement noted above, we couldn’t have clearer evidence than Lord Kalms’ letter to the Times (08/03/2011):

Sir, Around 1991 I offered the LondonSchool of Economics a grant of £1 million to set up a Chair in Business Ethics. John Ashworth, at that time the Director of the LSE, encouraged the idea but had to write to me to say, regretfully, that the faculty had rejected the offer as it saw no correlation between ethics and economics. Quite. Lord Kalms, House of Lords

You see, by now it must be clear that, given the state of our world today- a world of progress and poverty- the continuing and deepening global economic turmoil merely is a symptom of a much larger moral, spiritual and ethical crisis. In short, the world is facing a crisis of values.

This is where we need to discover the real Adam Smith. Time is now to question the functionality of the existing economic system that has created a massive and widening gap between a few super rich and the many in abject poverty. We need to examine the soundness of extracting growing profit from a highly leveraged and unsustainable real sector in the face of massive numbers of disenfranchised people who are deprived of a potentially prosperous economic life. We need to question the ability of mother earth to support the extravagance of our blind and ignorant consumerism.  We also need to put self interest in perspective, and balance it with concern for the common good and for other species and the earth.

We should recall the wisdom of Adam Smith, “father of modern economics”, who was a great moral philosopher, first and foremost. In 1759, sixteen years before his famous Wealth of Nations, he published The Theory of Moral Sentiments, which explored the self-interested nature of man and his ability nevertheless to make moral decisions based on factors other than selfishness. In The Wealth of Nations, Smith laid the early groundwork for economic analysis, but he embedded it in a broader discussion of social justice and the role of government. Today we mainly know only of his analogy of the ‘invisible hand’ and refer to him as defending free markets; whilst ignoring his insight that the pursuit of wealth should not take precedence over social and moral obligations.

In his "Theory of Moral Sentiments" he observed that "How selfish soever man may be supposed, there are evidently some principles in his nature, which interest him in the fortune of others, and render their happiness necessary to him, though he derives nothing from it except the pleasure of seeing it."

In summary, lest we forget, let us, once again recall the views of the real Adam Smith: He believed that people have a natural and appropriate concern for the well-being of others. This belief was a foundation of his vision of a market self-organized by mindful individuals who act with an inherent sense of responsibility for the well-being and happiness of their neighbours. He also recognized the responsibility of government to restrain those who fail in this duty.

Adam Smith and the political economists who followed in his tradition developed an elegant theory of the market’s capacity to self-organize for the common good for so long as it fulfilled a number of carefully articulated conditions, including the following:

In all, building a new economics system will demand challenging and novel ways of thinking, perspectives that encompass the broad swath of human experience and wisdom, from the natural sciences and all the social sciences, to the philosophical and spiritual values of the world’s major religions and of indigenous peoples as well.  The task before us is a daunting one, and wisdom in how to proceed will come from a multiple of sources, and must embrace the panorama of cultural and disciplinary perspectives.  Let us not carry on constructing a global society that is materially rich but spiritually poor. Let us begin to construct globalisation for the common good, as a path to construct a just and sustainable world.