‘. . . no society can legitimately call itself civilised if a sick person is denied medical aid because of lack of means.’— Aneurin Bevan, who established the NHS in 1948, to provide medical care free at point-of-need to all Britons

"We have been left with a system that puts profits before patients, competition before co-operation and failed utterly to improve patient care"- British Medical Associations

Our NHS is loved, efficient, cheapest and best health care system in the world. But, tragically, a bunch of neo-liberal market fundamentalists currently in power in Britain are set to destroy this wonderful and loved institution, by forcing it to be a slave to profit and the so-called market forces.

As Alan Bennett, the playwright and passionate champion of the underdog has recently noted, ‘with ideology masquerading as pragmatism, profit is now the sole yardstick against which all our institutions must be measured, a policy that comes not from experience but from assumptions – false assumptions – about human nature, with greed and self-interest taken to be its only reliable attributes.

In pursuit of profit, the state and all that goes with it is sold from under us who are its rightful owners and with a frenzy and dedication that call up memories of an earlier iconoclasm.’

Moreover, as Will Hutton writing about the NHS has eloquently observed:

‘It is also value-driven, as is the case with all great organisations. Curing leukaemia often culminates in a bone marrow transplant, with the molecular structure of the donor's bone marrow carefully matched with that of the recipient. Only healthy new bone marrow will prevent the cancer from reappearing. But that needs donors. The Anthony Nolan Trust has more than half-a-million volunteers who give their bone marrow and blood for free; the bigger the pool, the better the chance of a match, and thus of survival. They are unsung heroes and heroines, the best of humanity.

These donors are animated by the same value system as the NHS. The nurses who inspect stools and the consultants who mastermind the cocktail of drugs are united by the drive to cure, to give health and life. They are givers and sharers. They know humanity demands solidarity, empathy and looking out for each other – or else, who are you?

Of course they are imperfect and sometimes make mistakes. The sums have to add up, as they do in any organisation, but they add up to serve this larger purpose. You give your bone marrow for free to a service that provides health for free, funded by commonly created resources. Life-threatening disease is a lottery. Before this existential truth we stand together. Profit maximisation cannot be the value system at the heart of our healthcare system.

This is a way of thinking foreign to the army of centre-right commentators, economists and politicians who solemnly intone by the day that the only answer to the NHS's alleged failings is more market, more competition and more incentives.’

The British people must rise against this cheap and wasted ideology masquerading as pragmatism, and save our cherished NHS.

The NHS is the cheapest system in the world producing the best health outcomes. The New York-based Commonwealth Fund ranks 11 advanced countries' health systems for cost and health outcomes. Britain spends $3,404 (£2,000) per head on health compared with the $8,508 (£5,001) by the open-to-new-entrants US system, with the other nine countries in between.

From the first kidney transplant in 1960 to robotic open-heart surgery and last year's pioneering hand transplant, the NHS has always been at the forefront of giving the best to those in need of its services.

In 1948 the National Health Service was born: the first of its kind, it set out to provide healthcare for all, regardless of background or wealth. Now 66 years on, it treats one million people every 36 hours and is the 5th largest employer in the world, with a workforce of over 1.7 million people.

And now, as well as giving the best service possible, at times under very difficult circumstances, we now have the proof that, the NHS is has also the best out of 11 of the world’s wealthiest countries, following a far-reaching study by a US-based foundation.

This is not surprising. Time and again, we have seen that when something is for the common good, then, for sure, it is for the best.

Cost, efficiency and access to healthcare in Britain put it to the top of the ranking 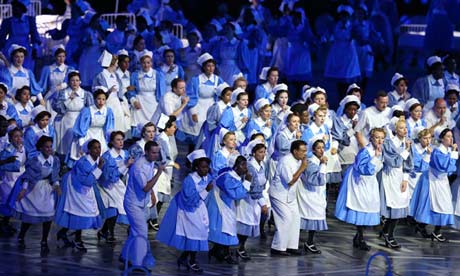 ‘In a report entitled “Mirror, Mirror on the Wall,” the quality, efficiency, cost and performance of the US health system was compared to Canada and nine other countries in Europe and Australasia.

Conducted by The Commonwealth Fund, the report ranks the UK first overall, scoring it highly for its quality of care, efficiency and low cost at the point of service, with Switzerland coming an overall second.

The US came last, as it has done in four other editions of “Mirror, Mirror” since 2004.

The full list of countries analysed in the study - published yesterday - were: New Zealand, Australia, France, Germany, Norway, Sweden, the Netherlands, Switzerland, Canada, Britain and the US. 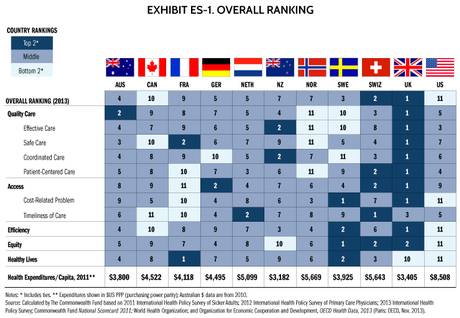 The compiled data was from the years prior to Obama’s flagship Affordable Care Act having been phased in, thus without the reverberations that are slowly being felt from it.

The foundation used information from its own 2011 national health system scorecard, as well evidence from the World Health Organisation (WHO) and the Organisation for Economic Cooperation and Development (OECD). It also used 2011-13 policy surveys of patients and primary care physicians, who discussed their views on their countries’ health systems.

According to the study, the UK “outperforms all countries” in the management of chronic illness. “The widespread and effective use of health information technology (HIT) in the UK plays a large role in the country’s high score on the chronic care management indicators, as well as its performance on system aspects of preventive care delivery.”

Britain also apparently leads the way in stellar levels of patient communication, alongside Germany. This relates to whether patients reported that they always or often got a clear, understandable and timely response from their doctor.

Customer feedback was also something that the UK excelled in, with 84 per cent of physicians receiving patient satisfaction data, compared with 60 per cent in the US which ranked third in that category.

The results will be welcomed by pro-NHS campaigners and pressure groups, whose aims are to protect the National Health Service from sliding into private hands.

“The most notable way the US differs from other industrialised countries is the absence of universal health insurance coverage,” which is available in five other nations, the publication states.

It says that despite being the most expensive health care system in the world, the US continually underachieves “on most dimensions of performance.”

Barrie Brown, Unite's national officer for health, told The Independent: “That the NHS is the best healthcare system in the world, in sharp contrast to the wholly private US system, is testament to dedication of NHS staff who have continually put the patient first in the face of senseless reorganisation, mounting debt and real term pay cuts.

“The government’s race to sell off of the NHS to private business will destroy this incredible British achievement and put profits before people. The glow from the report will be very short-lived if we do not stop the sale of our NHS and value the people who do extraordinary things every day.”

“Ten countries spend considerably less on health care per person and as a percent of gross domestic product than does the United States,” the report says.

The study adds: “These findings indicate that, from the perspectives of both physicians and patients, the US health care system could do much better in achieving value for the nation’s substantial investment in health.”

Britain slips up marginally on its “timeliness of care” and ranks a shocking second to last for the “healthy lives” indicator, which had looked at life expectancy, infant mortality and death rates for conditions treatable with medical care.

Contrary to popular opinion, the report claimed that it is a "common mistake" to associate universal health coverage with long waiting times for specialised care.

“The UK has short waiting times for basic medical care and nonemergency access to services after hours,” it says.

“The UK also has improved waiting times to see a specialist and now rates fourth on this dimension with the US ranking third.”

Overall, it was said that the UK provides “universal coverage with low out-of-pocket costs while maintaining quick access to specialty services.”

Paul Evans, director of the NHS Support Federation told The Independent: “It shows that the basic concept of the NHS not only works, it stands up well against all other systems.

“But within these results is a stark warning about opening up the NHS to the market and profit driven companies, like the US, as it is clearly not associated with care that is safe and effective for all.”

The NHS is loved and efficient, so why the obsession with reform? | Will Hutton | Comment is free | The Observer