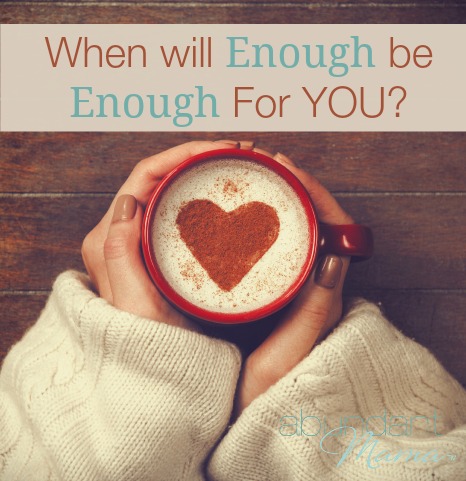 Nearly a year ago I posted a Blog: In Praise of Frugality: Materialism is a Killer where I noted the following:

“A deadly force is taking over our world.  This is a monster that can do too much harm to be so commonly welcomed into our society, and it goes by the name “Materialism.”  The scariest thing about materialism is that it is so easy to fall into, especially in this day and age. So you ask what is materialism? It is a fixation on and love for material objects over actual living things”…

I then had posed some pertinent questions:

“How Much Is Enough? What is money and wealth for? Why do we as individuals and societies go on wanting more? What is economic growth for? Can we/ should we carry on just growing, creating, producing, consuming,…,more and more, for ever more? Do we need to satisfy our needs or our wants? Should we be a “maximiser” or “satisfier” and choose the path of “enoughness”?  Then, what is a good life? What are the main ingredients of a good, happy and peaceful life? Should we move away from Gross National Product (GDP) to Gross National Happiness? What are we here for?”

Today I wish to share with you a possible path to how we might be able to achieve “Enoughness”.

As noted in a recent article in the Guardian, the Swedish term ‘lagom’ is the perfect term to describe an economic system where just enough is produced and consumed. Let me explain a bit more.

How to build a 'lagomist' economy

“The current capitalist economic system is in continual crisis. As Thomas Friedman, said in a New York Times op-ed: “What if the crisis of 2008 represents something much more fundamental than a deep recession? What if it’s telling us that the whole growth model we created over the last 50 years is simply unsustainable economically and ecologically and that 2008 was when we hit the wall, when mother nature and the market both said, ‘no more’.”

In the 21st century we need a new economic model to achieve a sustainable and equitable high quality of life for ourselves and our children. This model needs to go beyond the conventional “isms” (communism and capitalism) of the 20th century, all of which were focused on “growth at all costs”.

Getting the balance right between private, common and state property is critical to this new model. Communism (mostly common property) and capitalism (mostly private property) have both failed to get the balance right. The ongoing global economic and environmental crisis presents the opportunity to strike a new balance. Finding a path to sustainable prosperity requires that we achieve that balance.

The Swedes have a term that connotes many of the qualities of such an economy. The term is “lagom”, which means “just the right amount”. The origin is from old Viking tales about passing a horn full of mead around the campfire and everyone taking just the right amount, so that there was still some left for the last person in the circle.

A “lagomist” economy would be one that was “just the right size or scale.” It is not an economy of scarcity and sacrifice. It is an economy where just enough is produced and consumed – no more, no less. An economy that had achieved “optimal scale”.

It would also be an economy where the benefits were equitably distributed, not only within the current generation of humans but also with future generations and with other species. It would be an economy where goods and services were valued and allocated efficiently, including the services of natural and social capital. These services are currently external to the market allocation system and are part of the open access commons.

A new, more nuanced suite of property rights and responsibilities that give adequate weight to the commons would also be a part of a lagomist economy. Public goods such as the atmosphere and ecosystem services that are currently open-access need property rights assigned to them to adequately protect them. However, we cannot (and should not) assign private property rights to these inherently common assets. We need new global institutions that can assign and enforce property rights on behalf of the global community. Such an institution could effectively charge for GHG emissions and use those funds to reward activities that remove carbon from the atmosphere or reduce emissions. One such institution that has been proposed is an “earth atmospheric trust”, just one example of the implementation of the public trust doctrine to manage our common assets.

A large and growing number of individuals and groups around the world have been discussing how this new economy needs to look. These include the New Economy Coalition, the International Society for Ecological Economics, the UN, the Future Earth Initiative, the Post Carbon Institute, the Alliance for Sustainability and Prosperity, and many others. A broad consensus is forming around the basic characteristics mentioned above. But everyone has a different name for it: ecological, green, regenerative, circular etc. That leaves the impression the consensus is weak. It is not. It is strong. But it will not crystalise until we have consensus on a common term to describe and encapsulate it. I propose lagom as that term.

By the way, it can also be used as a greeting, an affirmation of goodness and a toast.

The above article was first published in the Guardian on Monday 6 April 2015:

How to build a 'lagomist' economy | Guardian Sustainable Business | The Guardian

Thanksgiving vs. Black Friday: Where is the Gratitude?

Policies must be for the common good- Lord Harries of Pentregarth

Values to Build a Better World