The Tyranny of Economic Consultants: The Not-So-Great Economist and Professor 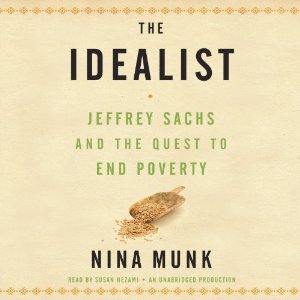 The Idealist: Jeffrey Sachs and the Quest to End Poverty

By Howard W. French
‘Jeffrey Sachs was certain he knew how to rid the world of poverty. He even said it would be easy. The world had other ideas.’

The early sections of Nina Munk’s book about the economist Jeffrey Sachs read like a celebration of a boy genius. No, strike that: Sachs piles up so many achievements so quickly that the word genius sounds somehow inadequate.

Today, though, Sachs is best known for his obsession with the noble idea of ending global poverty “once and for all.” In his 2005 best seller, The End of Poverty, he argued that with proper planning and funding, extreme poverty could be wiped off the Earth by 2025.

Months before the book’s publication, Sachs began work on a project designed to put his ideas in action in a handful of villages in sub-Saharan Africa. Munk, a reporter who had little prior experience in Africa, economics, or the amorphous field of “development,” spent six years following him on his trips to the continent and visiting on her own to assess his achievements there. The reader can feel her learning along the way, not just about her subject—the “Great Professor,” as one of his African employees calls him—but also about his ambitions and their distance from reality.

The more Munk gets to know Sachs, the more she perceives in him a deep unwillingness to concede any shortcomings in his ideas or their implementation. The first glimpse of this trait comes during an account of Sachs’s efforts, after his work in Poland, to help fashion an economic-reform program for Russia during the Yeltsin years. Today, these efforts are widely seen as having ended in failure. Munk quotes a 1999 speech by Joseph Stiglitz, then the chief economist for the World Bank, in which he blamed the failure of the Russian reform program on “an excessive reliance on textbook models of economics.” Sachs was not named, but he was the clear target. “Not surprisingly,” said Stiglitz, the program’s authors argued that “the medicine was right; it was only that the patient failed to follow the doctor’s orders!”

Gradually, as Munk becomes more attuned to this feature of Sachs’s thinking, and more confident in her judgments, it becomes clear that she has no interest in burnishing the Great Professor’s ample legend. On the contrary: Her book is a devastating portrait of hubris and its consequences.

SACHS BECAME OBSESSED WITH Africa during his first visit to the continent, a trip to Zambia in 1995, when the underfunded health care system had been totally overwhelmed by AIDS, tuberculosis, and malaria. The suffering and death Sachs saw shocked him, and he began reading everything he could about poverty, devouring works on agriculture, nutrition, disease, education, and commerce, synthesizing what he’d learned for papers and reports. Eventually he devised a massive experiment in foreign intervention at the village level. If it succeeded (or, in Sachs’ view, when it succeeded) in a handful of villages, it could then be expanded to cover entire countries and even—why not?—all of Africa.

The Millennium Villages Project was formally launched in June 2006, with support from the Earth Institute of ColumbiaUniversity (of which Sachs is the director), the United Nations Development Program, and donors like George Soros. By the end of 2006, it included 12 villages in 10 sub-Saharan countries; the goal was to put each on a path toward economic growth by investing heavily for five years in food production, health care, education, and infrastructure.

Given the deeply mixed record of development assistance to Africa, this was a bold wager. Decades of aid totaling billions of dollars had failed to lift much of the continent out of poverty. And, as the economist William Easterly has noted, Sachs’ “Big Plan,” for all its claims of novelty, bore striking similarity to ideas about foreign aid that had been propounded since the 1950s. But Sachs did more than promise success where others had failed; he also guaranteed sustainability. According to a memo circulated to Sachs’s senior staff, “When the five-year [Millennium Villages] funding stops, the MVs should be able to continue their economic progress without a loss of momentum, a drop in living standards, or a decline in social services.”

This goal was premised on the notion that development can be accomplished simply by assembling the right set of instructions, and then paying for their implementation. Over and over Sachs boasted that, with his plan, beating poverty wasn’t just doable, but easy.

“The good news to me is that there’s absolutely nothing wrong with African agriculture that can’t be quickly improved,” he told a London audience in 2007, in a typical display of his against-the-grain optimism. “There’s overwhelming systemic evidence that you can improve yields by a factor of two or three ... and that productivity won’t take a generation to double, but could be doubled actually from one growing season to the next.”

Criticism from development experts didn’t bother Sachs. What better idea did they have to stop the dying? Anyway, he’d done his reading, looked at the data. He had a plan, and he was sure it was a good one.

MUNK DEPICTS THE ON-the-ground reality of the Millennium Villages as seen through the eyes of Sachs’ African collaborators: enthusiastic, energetic people who committed his maxims about progress to memory. One of her main characters is Ahmed Maalim Mohamed, the MV representative assigned to Dertu, a remote and desolate locality in northeastern Kenya. He arrived from Belgium armed with a freshly minted doctorate and his copy of the 147-page, single-spaced Millennium Villages Handbook, which detailed, “intervention by intervention,” how he was to reorder village life and thereby eradicate poverty.

As MV money poured in, exciting things started happening in this singularly unpromising place, where all the water came from a single borehole and 80 percent of the population was illiterate. Tin roofs, a sure sign of new wealth, began to proliferate; the health clinic was staffed and equipped. Thanks to Sachs’ tireless fund-raising and salesmanship, big multinational companies were soon pitching in to establish mobile-phone service and provide chemically treated anti-mosquito nets.

*The above article by Howard W. French was originally published at Pacific Standard on 17 September 2013:

In Search of the Light to Change the World

A must read book: Economics Unmasked