‘The wounds inflicted by the coronavirus crisis will only be healed if we put the common good first.- Pope Francis 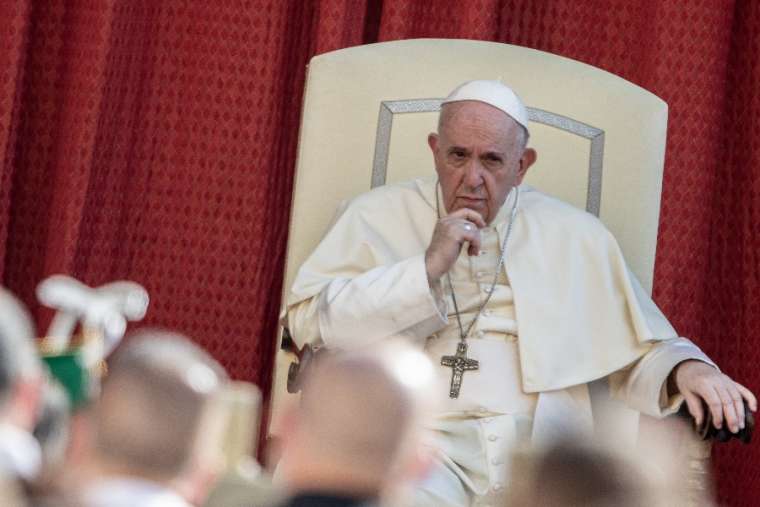 Pope Francis pictured at his general audience in the San Damaso Courtyard at the Vatican Sept. 9, 2020.

A Summary of the Pope’s Address:

‘Dear Brothers and Sisters, in our reflections on the current pandemic in the light of the Church’s social doctrine, we have seen that the common good must be the goal of our individual and collective efforts to heal our wounded world. Our Christian commitment in this regard is inspired by God’s unconditional love, which calls us to set no limits on our love for others and our concern for their welfare. As members of the one human family, our wellbeing is a public not simply a private good. By placing every human person and the common good at the centre of our cultural, economic and political activity, we will create a genuinely healthy, just and peaceful world, and so contribute to the building of a true “civilization of love”. The coronavirus heeds no cultural or political barrier or distinction – nor must we impose any barrier or distinction on our love as we work for the common good in responding to the grave problems brought to the fore by the pandemic, in fidelity to our Christian vocation.’

His general audience address, on “Love and the common good,” was part of a catechetical cycle entitled “Healing the world,” which the Pope launched on August 5. The cycle focuses on how the Church’s social doctrine can help the world to recover from the ravages of COVID-19, which has killed almost 898,000 people worldwide as of September 9, according to the Johns Hopkins Coronavirus Resource Center.

Before the audience, the pope spent time mingling with pilgrims, who stood at the barriers wearing face masks. When he reached the podium, he asked them to return to their carefully spaced-out seats in order to prevent the potential spread of the virus. It was only his second Wednesday audience with pilgrims since February due to the pandemic.

The audience began with a reading in several languages from Matthew 15:32-37, a passage known as the Feeding of the Four Thousand, in which Jesus feeds the multitude with seven loaves and a few fish.

“The crisis we are living due to the pandemic is affecting everyone; we will emerge from it for the better if we all seek the common good together,” the pope said, according to an unofficial translation provided by the Holy See press office.

Sadly, however, “partisan interests” were emerging.

“For example, some would like to appropriate possible solutions for themselves, as in the case of vaccines, to then sell them to others. Some are taking advantage of the situation to instigate divisions: by seeking economic or political advantages, generating or exacerbating conflicts. Others simply are not interesting themselves in the suffering of others, they pass by and go their own way. They are the devotees of Pontius Pilate, washing their hands of others’ suffering,” he said.

In contrast, the Christian response to the pandemic and resulting socio-economic crisis should be rooted in the love of God, which enables people even to seek the good of their enemies.

“Certainly, to love everyone, including enemies, is difficult — I would say it is even an art! But an art that can be learned and improved. True love that makes us fruitful and free is always expansive, and love is not only expansive, it is inclusive. This love cares, heals and does good,” the pope said.

Christian love also extends to civil and political relationships, he explained, as well as our relationship with nature.

“We know that love makes families and friendships flourish; but it is good to remember that it also makes social, cultural, economic and political relationships flourish, allowing us to construct a ‘civilization of love,’ as St. Paul VI used to love to say and, in turn, St. John Paul II. Without this inspiration, the egotistical, indifferent, throw-away culture prevails.”

Pope Francis told pilgrims that when he arrived for the audience he spoke to a married couple who asked for his prayers because they had a disabled child. He said that they had dedicated their whole lives to their son and suggested that they were an example of the love that we must show to all, including our political adversaries.

“Health, in addition to being an individual good, is also a public good. A healthy society is one that takes care of everyone’s health, of all.”

The pope said that love can help to build new social structures marked by creativity, trust and solidarity.

“Conversely, if the solutions for the pandemic bear the imprint of egoism, whether it be by persons, businesses or nations, we may perhaps emerge from the coronavirus crisis, but certainly not from the human and social crisis that the virus has brought to light and accentuated,” the Pope observed.

He added that a just and peaceful society could only be built upon the rock of the common good.

“And this is everyone’s task, not only that of a few specialists,” he said. “St. Thomas Aquinas used to say that the promotion of the common good is a duty of justice that falls on each citizen. Every citizen is responsible for the common good. And for Christians, it is also a mission. As St. Ignatius of Loyola taught, to direct our daily efforts toward the common good is a way of receiving and spreading God’s glory.”

He suggested that, while politics has a bad reputation, a good politics that puts the human person and the common good at its center is still possible. Christians can demonstrate this by exercising the virtue of charity, which has an “intrinsic social dimension.”

He concluded: “It is therefore time to improve our social love — I want to highlight this: our social love — with everyone’s contribution, starting from our littleness. The common good requires everyone’s participation. If everyone contributes his or her part, and if no one is left out, we can regenerate good relationships on the communitarian, national, and international level, and even in harmony with the environment.”

“Thus, through our gestures, even the most humble ones, something of the image of God we bear within us will be made visible, because God is the Trinity, God is love … With His help, we can heal the world working, yes, all together for the common good, for everyone’s common good.”

After greeting members of different language groups, the Pope noted that September 9 was the first International Day to Protect Education from Attack. The day, established in May by the United Nations General Assembly, highlights the plight of the more than 75 million children worldwide whose schooling is disrupted by violence.

He said: “I invite you to pray for students who are seriously deprived of the right to education due to war and terrorism. I urge the international community to do its utmost so that the structures that must protect young students be respected. May efforts that guarantee safe environments for their education not wain, above all in situations of humanitarian crises.”