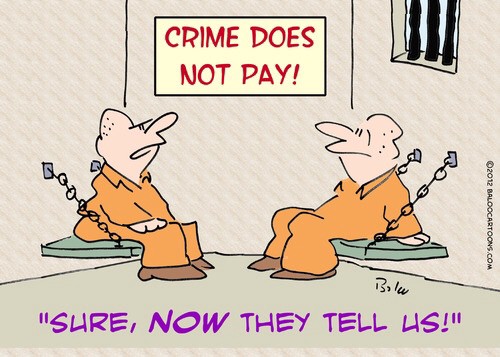 …on the contrary, crime does pay.

(It all depends on who does the crime!)-Photo:Medium

“If the authorities were consistent, they would punish the banks just as severely as they reacted to last year's rioters…But those in the financial stratosphere apparently see matters of right and wrong, crime and punishment, rather differently to the rest of us. It was the same Bob Diamond who last year told MPs, "There was a period of remorse and apology for banks and I think that period needs to be over" – calling time on the era of bankers' penitence before most thought it had begun.

…And yet, what can be done? You'd think criminal prosecutions would be the obvious next step, but it's not so simple: Libor falls outside the FSA's remit. Yes, there's that £290m fine – though it's worth noting only £60m of that was imposed by the UK, the rest demanded by American authorities. What's more, that £290m is destined not for the public coffers but for the FSA, which will therefore need to levy less from the banks that fund it – including Barclays. So Barclays lose with one hand but are set to gain with the other. Above all, remember that that £290m is about a tenth of the £2.7bn bonus pool Barclays top dogs paid themselves in 2011. It's more than a slap in the wrist, but not much more…

…It's quite a contrast with the severity of punishment meted out to those guilty of more visible crimes, starting with the 1,292 people jailed for their part in last summer's riots, including the man imprisoned for six months for stealing bottles of water worth £3.50. There was no question of the authorities lacking a proper remit then, nor did any rioter have the chance to tell a parliamentary committee it was time we all moved on.”…

In this spirit, I am also delighted that on Thursday 28 June 2012, I had written the following:

“Last year rioters in England, and the petty thieves, have been punished and put behind bars for months and years to come; given criminal records, affecting their lives and well-being for ever. Yesterday, Barclays bank and its boss, Bob Diamond, were caught red-handed, for what seems to be one of the most serious immoral activities ever. However, Bob being such a nice guy said that he and his cronies at the bank will so graciously and generously give up their bonuses for one year! Wow!”…

The Barclays scandal is not 'wholly inappropriate'. It's a crime