A reflection on the timeless remarks made by Senator Robert F. Kennedy on

economic growth at the University of Kansas, March 18, 1968 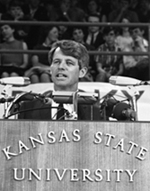 In 1968, with the war in Vietnam at its height and the US psyche in consequent turmoil, senator and presidential hopeful Robert F Kennedy in a moving speech mounted a coruscating attack on one of the sacred cows of economics: The target of the senator's ire was Gross National Product (GNP), the dominant indicator of US economic well-being, then and now.

The Senator noted that:

"It counts napalm and the cost of a nuclear warhead, and armoured cars for police who fight riots in our streets."

"It counts Whitman's rifle and Speck's knife, and the television programmes which glorify violence in order to sell toys to our children.”

"It measures everything, in short, except that which makes life worthwhile."

“…We will find neither national purpose nor personal satisfaction in a mere continuation of economic progress, in an endless amassing of worldly goods. We cannot measure national spirit by the Dow Jones Average, nor national achievement by the Gross National Product. For the Gross National Product includes air pollution, and ambulances to clear our highways from carnage. It counts special locks for our doors and jails for the people who break them. The Gross National Product includes the destruction of the redwoods and the death of Lake Superior. It grows with the production of napalm and missiles and nuclear warheads…. It includes… the broadcasting of television programs which glorify violence to sell goods to our children.”

“And if the Gross National Product includes all this, there is much that it does not comprehend. It does not allow for the health of our families, the quality of their education, or the joy of their play. It is indifferent to the decency of our factories and the safety of our streets alike. It does not include the beauty of our poetry, or the strength of our marriages, the intelligence of our public debate or the integrity of our public officials… the Gross National Product measures neither our wit nor our courage, neither our wisdom nor our learning, neither our compassion nor our devotion to our country. It measures everything, in short, except that which makes life worthwhile….”

And this is how he concluded his speech:

“George Bernard Shaw once wrote, "Some people see things as they are and say why?  I dream things that never were and say, why not?"

I can only wonder what the US and the world would have looked like today if Senator Kennedy, his brother President Kennedy, Dr. Luther King, and others like them were not assassinated. God grant them all eternal rest; they were, in the old idiom, great wise men, who if required, may still be peacemakers in heaven.

** Given so much justified criticism of modern economics with its many shortcomings, it is gratifying to note that there is going to be an overhaul of the teaching of economics at universities. May this be a fitting tribute to the memory of Senator Kennedy’s speech at the University of Kansas, in March 18, 1968.

University economics teaching to be overhauled