‘An event can be shocking and at the same time not at all surprising. The dark hours when the Capitol was overrun by a pro-Trump horde, some of the invaders emblazoned with Nazi slogans, were the product of the four dark years of vandalism he has unleashed on America’s body politic. The assault on Capitol Hill was the savage consummation of a presidency founded, fuelled and feeding on division; a presidency that has stamped on democratic norms, fomented lunatic conspiracy theories and made lies the chief currency of its public discourse since the very beginning…

‘The Trump presidency has emboldened autocrats the world over to believe that liberal democracy is in decline and tomorrow belongs to them. It is not just America that has suffered a terrible price for the Trump presidency. The cost is being paid in lost liberty around the planet.’-Andrew Rawnsley, ‘Tyrants gaze with glee at what Trump has done to American democracy’, The Observer, Sunday 10 January 2021

‘Whether it’s over trade, climate change or justice for 19-year-old Harry Dunn, those cabinet ministers have come away with absolutely nothing to show for these public displays of sycophancy except for a diminished reputation for Britain in the world... The special relationship with the US works when it is based on honesty, mutual trust and respect. Ministers were so eager to swallow the Trump playbook of how politics should be done that they abandoned British values, interests and their own self-respect... Britain’s foreign policy must have a moral centre and we should have the confidence to stand firm against those who undermine our values and our interests. Our country is better than this and we deserve a government that shows it.’- Lisa Nandy MP, the shadow foreign secretary

'Donald Trump Is Now a Terrorist Leader', David Corn, Mother Jones' Washington bureau chief and an on-air analyst for MSNBC, and thus, similar to any other terrorist, he is now banned from social media

And this is the man that has heaped praises on the Little English Brexit Agitators and in turn has been loved and admired by them!!

In the Interest of Accountability to History, Our Humanity and Truth

As 'Trump blows up US democracy', it is time to remember the love, admiration and the slavish support of

the Little English Tory Brexiteers for him.

A Dark History Never to be Forgotten

The Similarities Between Boris Johnson And Donald Trump 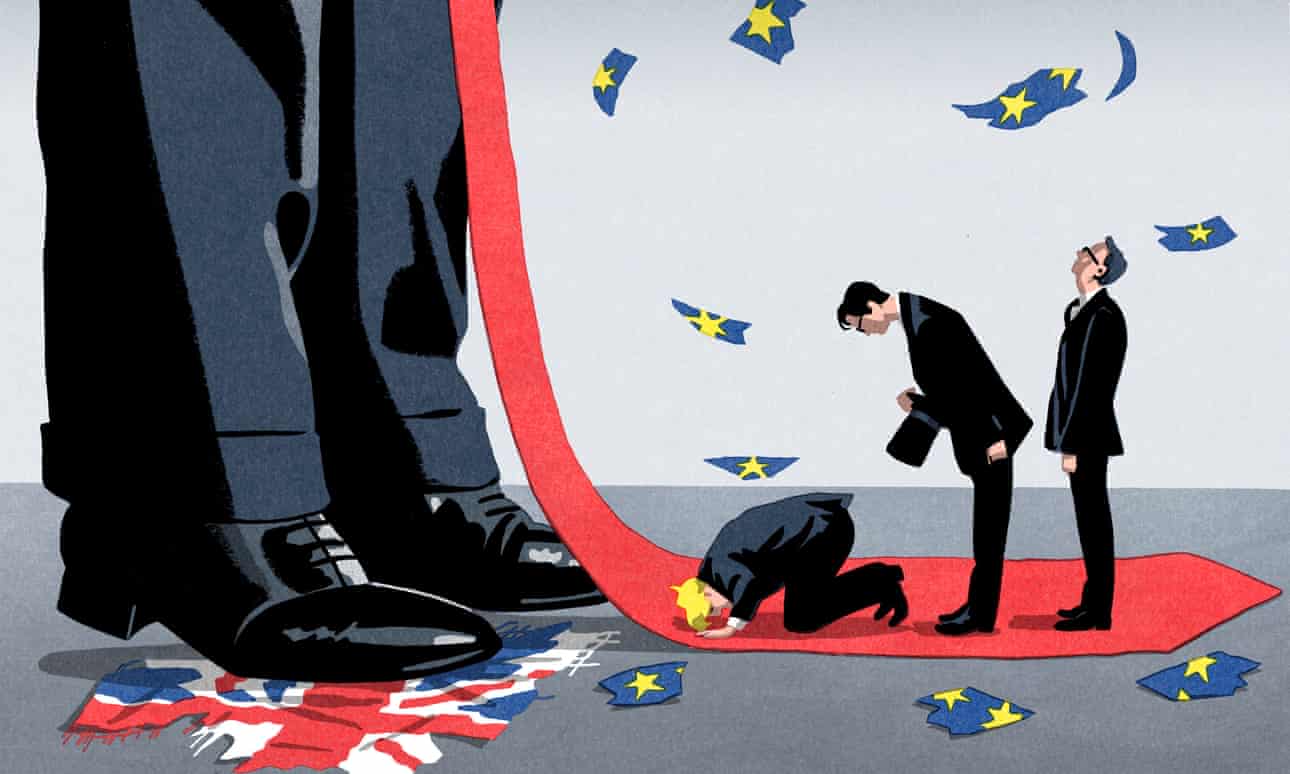 Illustration: Bill Bragg, Via The Guardian

‘That is trickier for those who put their enthusiasm on the record. None outdid Michael Gove, comparing Trump to George Washington. The first president had also been misunderstood by Britain, Gove wrote in an unctuous interview with the 45th. He cast Trump as a “force of nature” who did not merit the “scorn and condescension” of his UK critics. To compensate for his countrymen’s discourtesy, Gove posed with his subject, grinning and giving the thumbs-up.

In the gallery of cringing subservience that image can hang alongside Theresa May holding the president’s hand during her first visit to the White House. Later that day, Trump issued executive order 13769 – the entry ban on nationals from predominantly Muslim countries. May did not condemn it.

Some said there was a better man behind the mask, but there was no mask. The racist snarl, the bully’s sneer and the infantile pout were all his. The face of the campaign was true to the character of the candidate. The only way to see a nobler Trump was to mould one from delusion, cowardice and self-interest – plentiful resources in a government embarking on Brexit…’- Continue to read

'They call him Britain Trump': US president congratulates Boris Johnson on being elected

"We have a really good man who's going to be the prime minister of the UK now, Boris Johnson. He's tough, he's smart... they call him Britain Trump"-@BBCPolitics

Blond, bombastic and with an eye for the ladies - it's Boris Trump!

QUENTIN LETTS on the similarities between the US President and BoJo 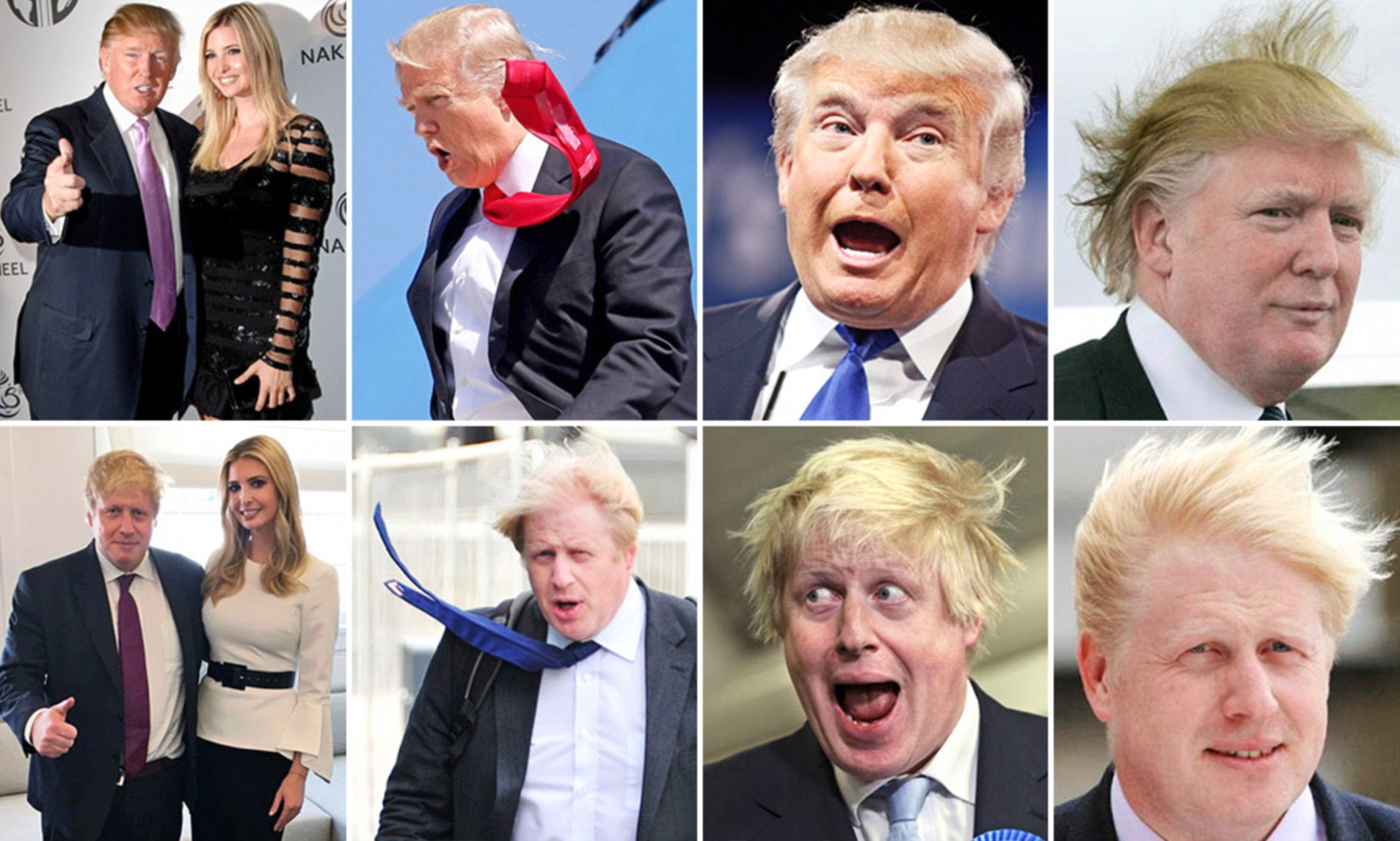 Senior Tories are being shown for what they really are after, ‘years of fawning over a known populist who insulted his allies, peddled conspiracy theories

and, by treating authoritarians as his natural allies, undermining democracy everywhere.’

‘Much of this tolerance was due to Brexiteers seeing Trump’s and their own rise stemming from the same ideological well. Jacob Rees-Mogg wrote in the Times in 2018 ahead of one of Trump’s visits: “It is our national good fortune that the president with whom we will develop this new arrangement is Mr Trump. His election depended upon similar factors to those that led to Brexit. He appealed to voters left behind by the metropolitan elite and he exudes confidence about his own nation and a determination not to be a manager of decline, which also inspires the Brexiteers.”

Not long ago, ‘Boris Johnson said Trump was as worthy of the Nobel peace prize as Barack Obama and described him as a standard New York liberal. In 2018 Johnson said: “I am increasingly admiring Donald Trump. I have become more and more convinced that there is method in his madness.”  Photos of Michael Gove, the now Cabinet Office minister and prominent Brexit campaigner, grinning thumbs-up alongside the president caught the initial mood.’- Read more

…’Instead, Gove was in New York to serve as a cheerleader, to gloss over Trump’s inconsistencies and outright ignorance on assorted topics – “intelligence takes many forms”, Gove writes kindly – and to pose for a souvenir photograph in which both men give a thumbs up, a framed cover of Playboy just over Gove’s shoulder.’ 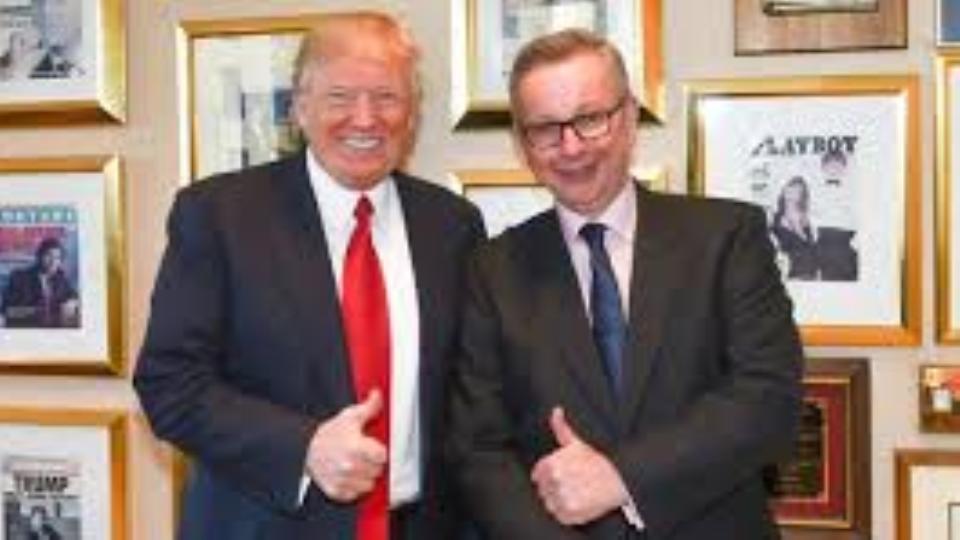 More on the Tories who have Praised and Supported Trump: A Dark History Never to be Forgotten

Here are the British politicians who have backed Donald Trump

The storming of the Capitol in Washington is a wake-up call for states around the world, writes the mayor of London

“Any trade deal between the U.S. and U.K. must be contingent upon respect for the [Good Friday] Agreement and preventing the return of a hard border. Period,” Biden tweeted Wednesday. House Speaker Nancy Pelosi had a similar message.

The reaction among some Tories was swift. Iain Duncan Smith, one of the stalwart Brexiters and a former Tory leader, snapped that Biden should worry more about “the need for a peace deal in the USA to stop the killing and rioting before lecturing other sovereign nations.” Others, including former Brexit minister David Davis, piled on too.’- Tories may warm to Biden, but they’ll miss Trump

Here are a couple of good, honest Tories, standing up for Truth: 'Tories no longer party of Churchill and more the party of Trump

And now a Question for Your Reflection:

Can Brexit Still Be Valid, When We Now All Know Well, Who the First Culprit was to Call For It?

Nigel Farage, ‘King of Europe’ Fighting for the ‘The American Dream’ alongside his Hero 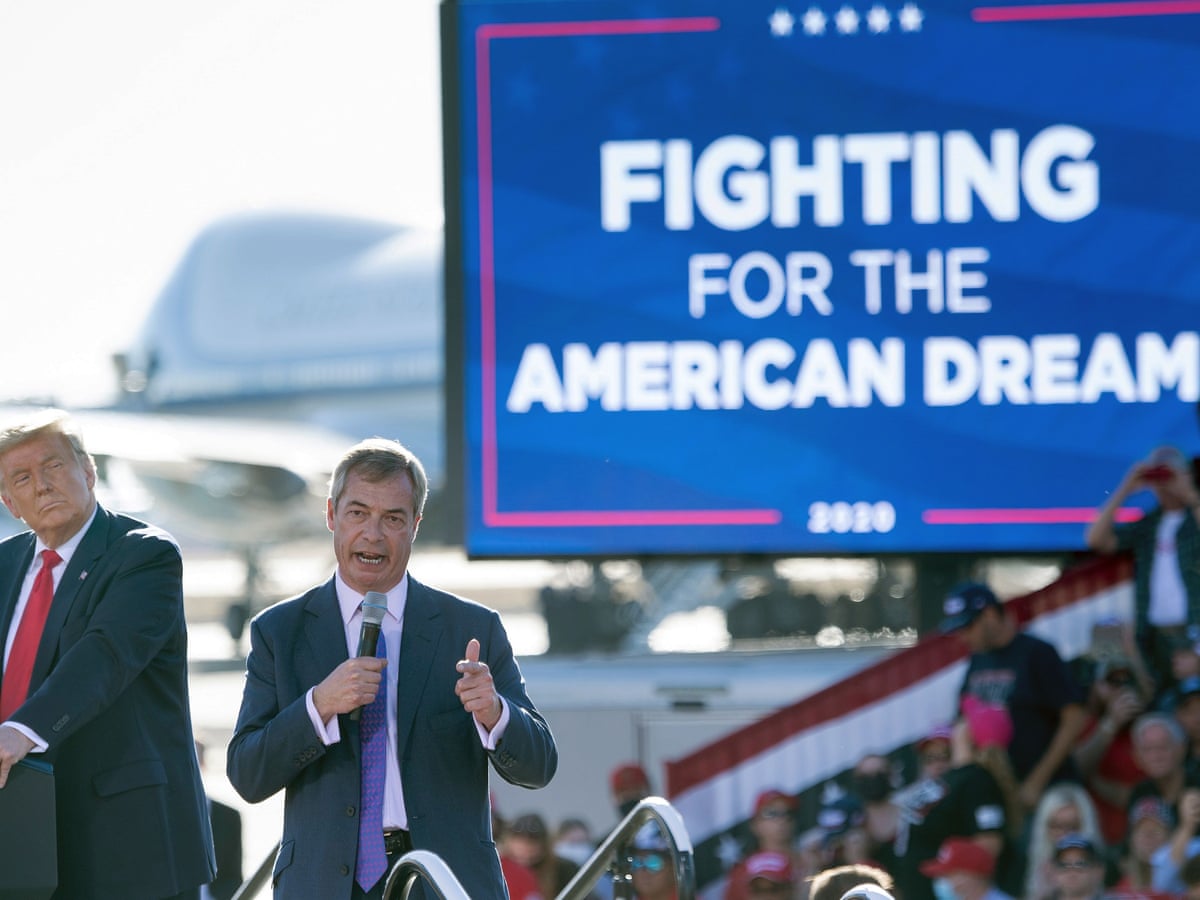 A Selected Postings from the GCGI Archive, I am Proud to Note Them Again:

‘Independence’ and the Lies of Brexit

BREXIT Broke My Heart: The Moment that the Milk of Human Kindness Went Sour and Lumpy

I failed to stop Brexit, but I could do my bit to make my country a better place

And Given the Lessons of Trump, Trumpism, Brexit and Brexitism: There is Only One Path to a Better World 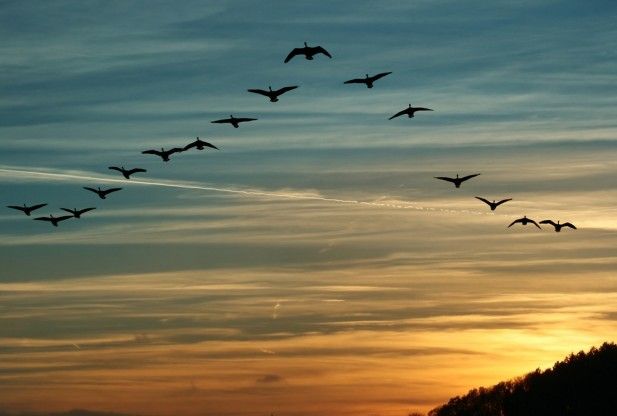 Birds flying in a V formation in collaboration to support each other’s flight. Photo: Pinterest