Pope Francis released a new encyclical in Assisi on October 3 for the Feast of St. Francis. The title, “Fratelli Tutti,” can be translated as “Brothers and Sisters, All.” It highlights the theme of friendship and kinship, calling for peace and harmony among all peoples, religions, and nations.

In an article in the National Catholic Reporter by JOSHUA J. MCELWEE, it is noted that: ‘Pope's post-COVID encyclical envisions a less populist, less capitalist world, laying out a comprehensive vision for how the world should change after the coronavirus pandemic. Pope Francis imagines societies that are more caring, more focused on helping those in need and fundamentally less attached to the principles of market capitalism.’

I firmly believe that, given the current global circumstances, this new encyclical will have widespread influence around the world, as has Laudato Si'  (Praise Be!: On Care for our Common Home) issued by the Pope in 2015.

FRATELLI TUTTI, Pope Francis’ third encyclical, which was published on 4 October 2020, urges  all people of goodwill to recognize the equal dignity of every person and to work together to build a world where people love and care for one another as brothers and sisters.

The pope is challenging us to overcome individualism in our culture and to serve our neighbors in love, and seeking a society of justice,  mercy, and compassion.

OF THE HOLY FATHER

ON THE FRATERNITY AND SOCIAL FRIENDSHIP

'Given in Assisi, at the tomb of Saint Francis, on 3 October, Vigil of the Feast of the Saint, 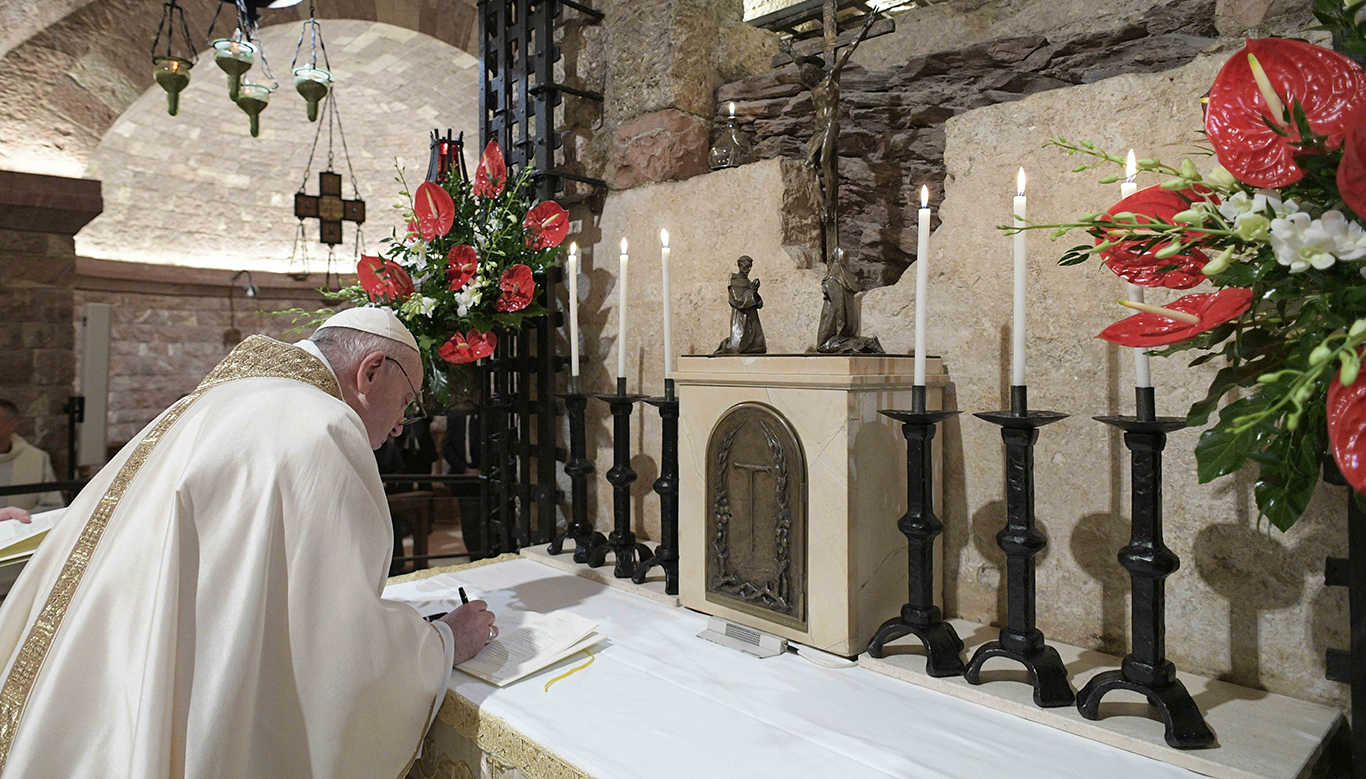 ‘Individualism {At the heart of the current global neoliberal socio economic and political model} does not make us more free, more equal, more fraternal. The mere sum of individual interests is not capable of generating a better world for the whole human family. Nor can it save us from the many ills that are now increasingly globalized. Radical individualism is a virus that is extremely difficult to eliminate, for it is clever. It makes us believe that everything consists in giving free rein to our own ambitions, as if by pursuing ever greater ambitions and creating safety nets we would somehow be serving the common good.’

Pope Francis has warned against “myopic, extremist, resentful and aggressive nationalism” in some countries, and a “growing loss of the sense of history” in a major document outlining his view of the world.

Fratelli Tutti – the third encyclical, a pastoral letter addressed to the whole of the Catholic church, of his papacy – was published on Sunday, the feast of Saint Francis of Assisi, amid global uncertainty and anxiety over the Covid-19 pandemic and rising populism.

In the 45,000-word document, the pope urges nations to work towards a just and fraternal world based on common membership of the human family. He expands on familiar themes in his teachings, including opposition to war, the death penalty, slavery, trafficking, inequality and poverty; concerns about alienation, isolation and social media; and support for migrants fleeing violence and seeking a better life.

Pope Francis had begun writing the encyclical when the pandemic “unexpectedly erupted”. But, he says, the crisis has reinforced his belief that political and economic institutions must be reformed to address the needs of those most harmed by it. The global health emergency has demonstrated that “no one can face life in isolation” and that the “magic theories” of market capitalism have failed.

“Aside from the differing ways that various countries responded to the crisis, their inability to work together became quite evident,” Francis writes. “Anyone who thinks that the only lesson to be learned was the need to improve what we were already doing, or to refine existing systems and regulations, is denying reality.

“The fragility of world systems in the face of the pandemic has demonstrated that not everything can be resolved by market freedom. It is imperative to have a proactive economic policy directed at ‘promoting an economy that favours productive diversity and business creativity’ and makes it possible for jobs to be created, and not cut.”

Francis says a “certain regression” has taken place in today’s world. He notes the rise of “myopic, extremist, resentful and aggressive nationalism” in some countries, and “new forms of selfishness and a loss of the social sense”.

The leader of 1.2 billion Roman Catholics says “we are more alone than ever” in a world of “limitless consumerism” and “empty individualism” where there is a “growing loss of the sense of history” and a “kind of deconstructionism”.

“Hyperbole, extremism and polarisation” have become political tools in many countries, he writes, without “healthy debates” and long-term plans but rather “slick marketing techniques aimed at discrediting others”.

He notes that “we are growing ever more distant from one another” and that voices “raised in defence of the environment are silenced and ridiculed”.

Addressing digital culture, he criticises campaigns of “hatred and destruction” and says technology is removing people from reality. Fraternity depends on “authentic encounters”.

He writes: “Let us dream, then, as a single human family, as fellow travellers sharing the same flesh, as children of the same earth which is our common home, each of us bringing the richness of his or her beliefs and convictions, each of us with his or her own voice, brothers and sisters all.”

The Right Reverend Richard Moth, the bishop of Arundel and Brighton, said the encyclical was very consistent with previous teachings and messages, but had particular relevance now. “He is saying there are very clear risks to not learning the lessons of history,” he said.

Christine Allen, the director of the Catholic aid agency Cafod, said Pope Francis was “unflinching in his message”.

“Politics is failing the poor, and it is shameful that some political decisions that are made affect the poorest, plunging them further into poverty, suffering and despair,” she said, adding: “This is a message not just to Catholics, or people of other faiths, it is to everyone. It is a powerful voice amid the pandemic, growing inequality, conflict and racial unrest. Pope Francis’s message is clear: we cannot just switch on the reset button and go back to ‘normal’.”

The pope says his inspiration for the encyclical came from St Francis of Assisi and non-Catholics such as Martin Luther King, Desmond Tutu and Mahatma Gandhi. Fratelli Tutti, he says, develops some of the themes of the Document on Human Fraternity that he signed with the grand imam of al-Azhar University, Sheikh Ahmed al-Tayeb, in Abu Dhabi last year.’

The Pandemic and the forgotten Love Story