My Poem of the Month: August is the Month of Love, Compassion, Joy, Grace and the Blessed Harvest

‘Fairest of the months!

The hey-day of the year

With robes that gleam with sunny sheen

‘Blessed be the Harvest,

Blessed be the Corn Mother,

Blessed be the Grain God,

For together they nourish both body and soul.

Many blessings I have been given,

I count them now by this bread.

Guardian of the East, I pray for your indulgence.

Hear me now as I request your aid in the cycle of life.

As your winds blow through fields of ripened grain,

Carry loosened seeds upon your back

That they may fall amidst the soil

That is our Mother Earth.’- Lammas Ritual

‘It is now high summer and the union of Sun and Earth, of God and Goddess, has produced the First Harvest. Lammas is the celebration of this first, Grain Harvest, a time for gathering in and giving thanks for abundance. We work with the cycle that Mabon or the Autumn Equinox is the Second Harvest of Fruit, and Samhain is the third and Final Harvest of Nuts and Berries.

'The word 'Lammas' is derived from 'loaf mass' and is indicative of how central and honoured is the first grain and the first loaf of the harvesting cycle...’- Read more

August is the month of Gladiolus and Poppy, flowers of faithfulness, love, reselience, sincerity,

‘Shall I compare thee to a summer's day?’-  William Shakespeare

‘In August, the large masses of berries, which, when in flower, had attracted many wild bees, gradually assumed their bright velvety crimson hue, and by their weight again bent down and broke their tender limbs.’-  Henry David Thoreau

‘Summer is delicious, rain is refreshing, wind braces up, snow is exhilarating; there is no such thing as bad weather, only different kinds of good weather.’-  John Ruskin

Last month, I offered some of the finest poems for July, so now I move forward to August, the last month of Summer, before the chill of autumn by offering some beautiful and inspiring poems.

August, the eight month,  as Billy Mills, writing in the Guardian has reminded us, ‘is the second to be named after a Roman emperor, this time Augustus. He is said to have chosen this month for his own because he'd had a number of military victories in Sextus, or the sixth month, as it had previously been called before the addition of January and February. For those of us in the northern hemisphere, August is the last month of summer, with just a hint of autumn in the air.’

However, for our friends  south of the equator, things are very different, where their August is much like our February. 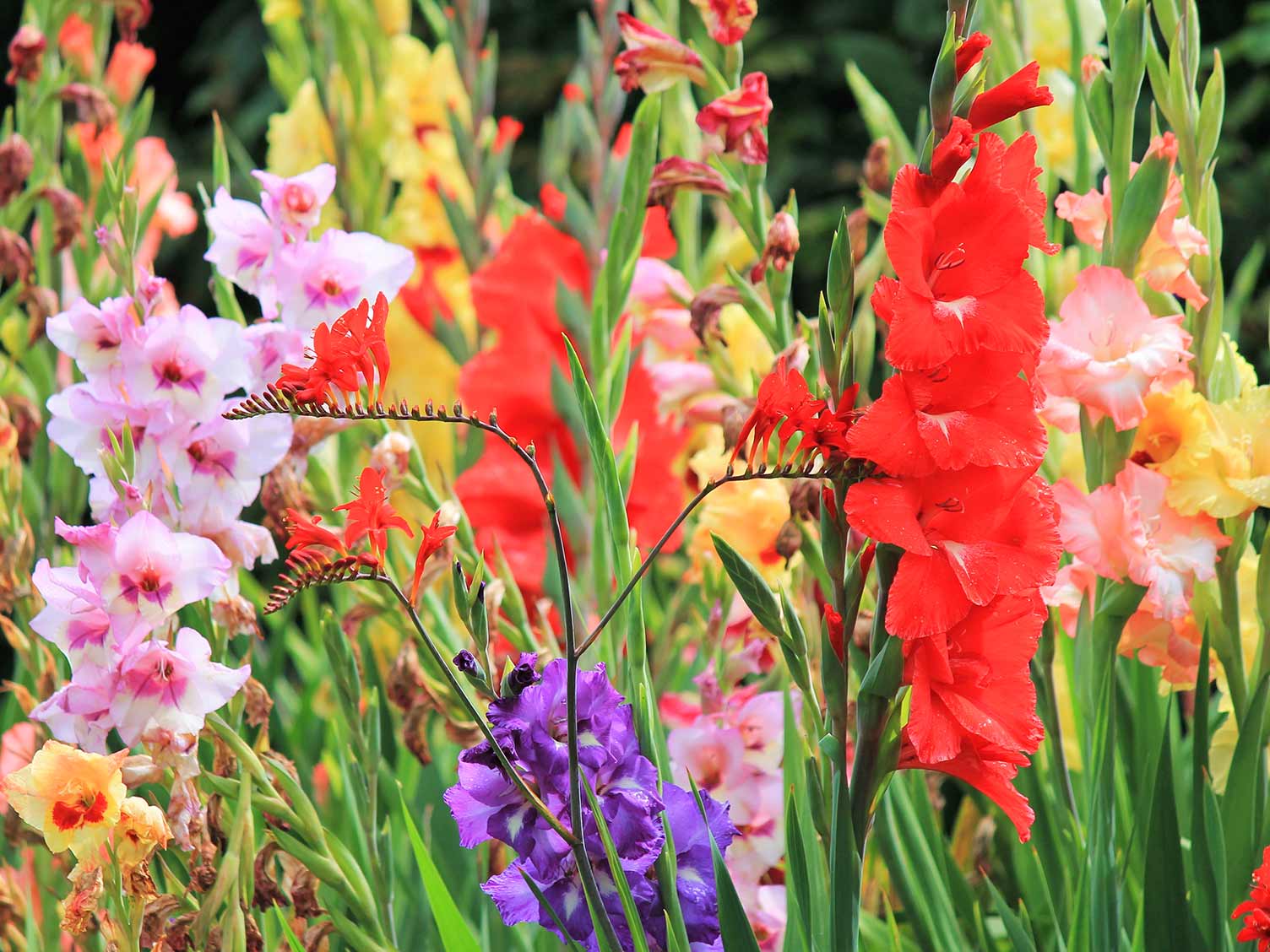 Gladioli are known to symbolize strength of character, faithfulness, integrity, infatuation, and persistence. Beyond these meanings, the birth flower for August carries other meanings that differ by color.

Poppy: The Other August Birth Flower 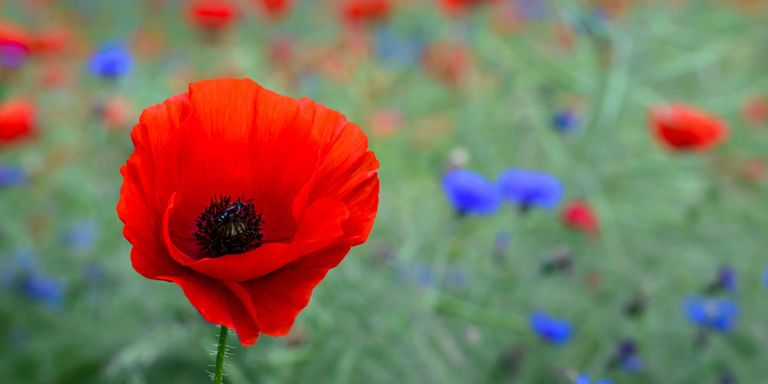 Beginning with my August poems, my first offering is Robert Burns's Song – ‘Composed in August’ which is filled with all the charms of the rural settings. ‘The Scottish summer landscape is teeming with life and forms the perfect backdrop to the poet's declaration of love for his darling Peggy.’

The moorcock springs on whirring wings

And the moon shines bright, as I rove by night,

To muse upon my charmer.

The paitrick loves the fruitful fells,

The plover loves the mountains;

The woodcock haunts the lonely dells,

The soaring hern the fountains:

The path of man to shun it;

The hazel bush o'erhangs the thrush,

The spreading thorn the linnet...'-Composed In August

Mary Oliver’s ‘The Summer Day’ is another lovely poem, characteristic of much of her best writing. It focuses on nature and the purpose of life, which feels appropriate in this season of sun! 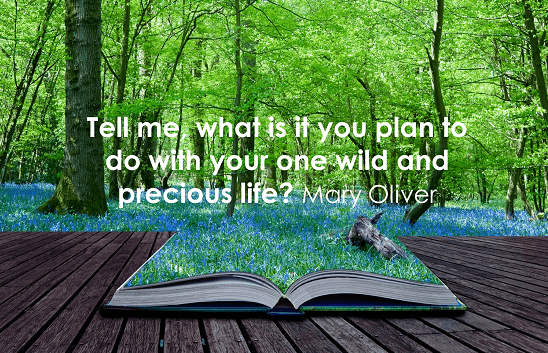 ‘Who made the world?

Who made the swan, and the black bear?

Who made the grasshopper?

This grasshopper, I mean –

the one who has flung herself out of the grass,

the one who is eating sugar out of my hand,

who is gazing around with her enormous and complicated eyes.

Now she lifts her pale forearms and thoroughly washes her face.

Now she snaps her wings open, and floats away.

I don’t know exactly what a prayer is.

I do know how to pay attention, how to fall down

how to be idle and blessed, how to stroll through the fields,

which is what I have been doing all day.

Tell me, what else should I have done?

Doesn’t everything die at last, and too soon?

Tell me, what is it you plan to do

with your one wild and precious life?’-Mary Oliver

And now how about William Morris and his lovely poem ‘Summer Dawn’,  an aubade, a poem which depicts the wondrous sunrise. 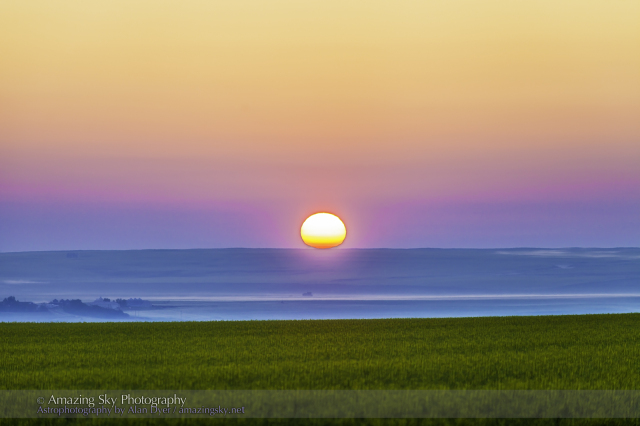 ‘Pray but one prayer for me 'twixt thy closed lips,

Think but one thought of me up in the stars.

Faint and grey 'twixt the leaves of the aspen, betwixt the cloud-bars

That are patiently waiting there for the dawn:

Patient and colourless, though Heaven's gold

Waits to float through them along with the sun.

Far out in the meadows, above the young corn,

The heavy elms wait, and restless and cold

The uneasy wind rises; the roses are dun;

Through the long twilight they pray for the dawn,

Round the lone house in the midst of the corn,

Speak but one word to me over the corn,

Over the tender, bow'd locks of the corn.’- William Morris

Another favorite poem of mine is by John Clare-“the quintessential Romantic poet”- ‘The Shepherd’s Calendar: August’. 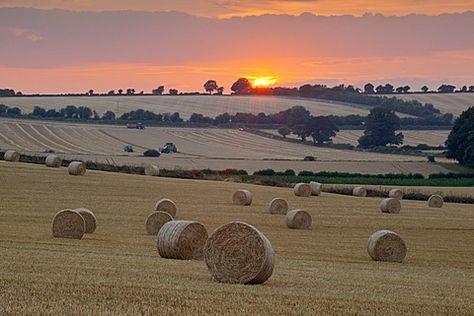 ‘Harvest approaches with its bustling day

And tawney glooms the valley thronged with beans

Seem not so lovely as its quiet seems

Doors are shut up as on a winters day

And not a child about them lies at play

The dust that winnows neath the breezes feet

Is all that stirs about the silent street…’- Read more

Photo: The Duchy of Cornwall Nursery

‘There were four apples on the bough,

The blood was ripe inside the core;

The colour of the leaves was more

Through all the gold June meadow’s floor.

The warm smell of the fruit was good

To feed on, and the split green wood,

With all its bearded lips and stains

Of mosses in the cloven veins,

Most pleasant, if one lay or stood

In sunshine or in happy rains.

There were four apples on the tree,

The sun went warm from core to rind;

The green leaves made the summer blind

In that soft place they kept for me

With golden apples shut behind.

The leaves caught gold across the sun,

And where the bluest air begun,

Thirsted for song to help the heat;

As I to feel my lady’s feet

Draw close before the day were done;

Both lips grew dry with dreams of it…’- Read more

Thomas Hardy’s poem, ‘An August Midnight’, is another gem that I wish to note. Thomas Hardy was interested in ‘natural history’ and the reconsideration of the relationship established between men and nature. Hence, this can be read in ‘An August Midnight.’ The poem presents the meeting of a man with five insects. However, the man and the insects are described as equals, generating empathy with these small creatures. 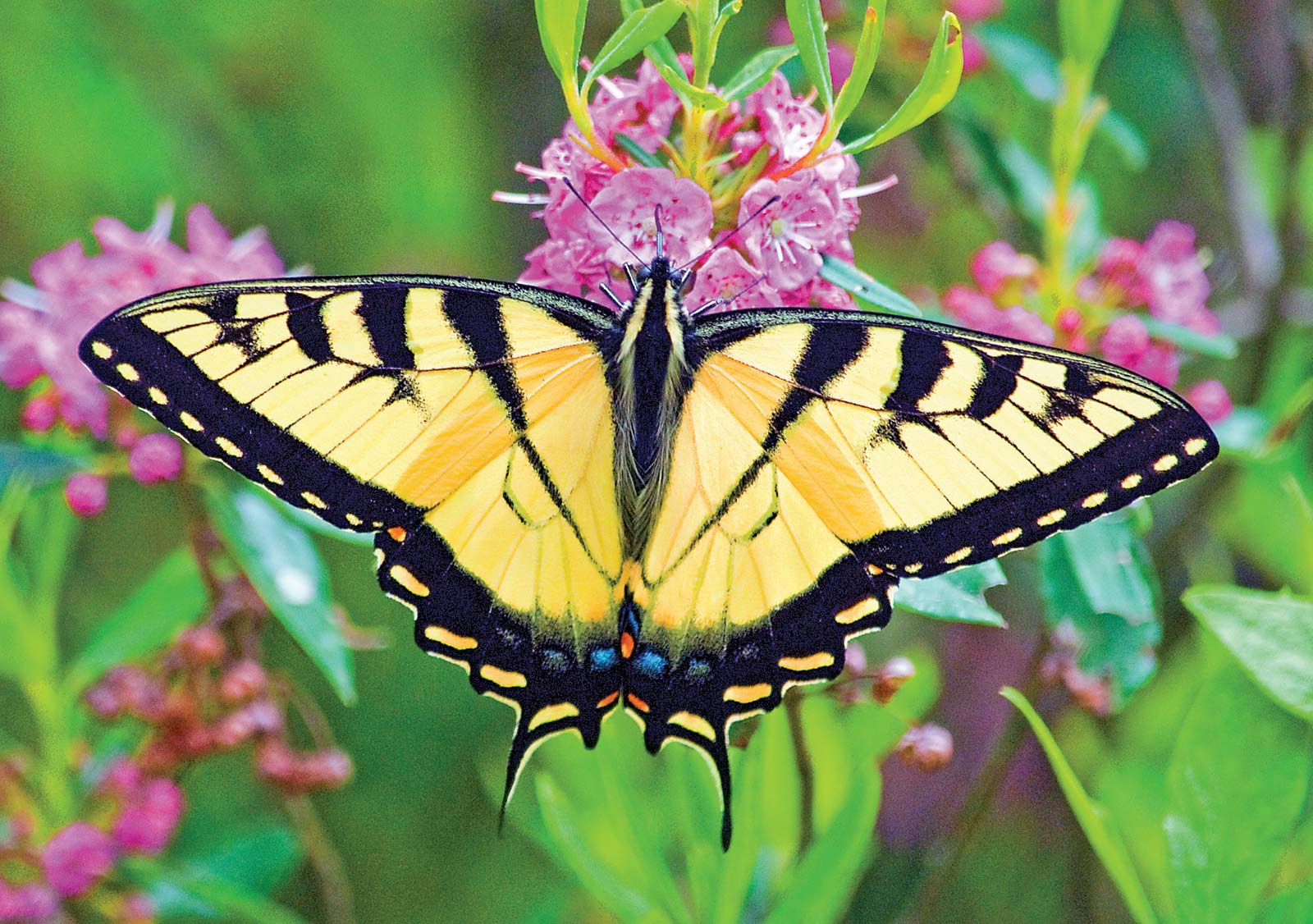 ‘A shaded lamp and a waving blind,

And the beat of a clock from a distant floor:

On this scene enter—winged, horned, and spined—

A longlegs, a moth, and a dumbledore;

While 'mid my page there idly stands

A sleepy fly, that rubs its hands...

Thus meet we five, in this still place,

—My guests besmear my new-penned line,

Or bang at the lamp and fall supine.

August, as Oliver Tearle notes, ‘is the month when we notice all the moths and other insects scuttling and fluttering about at night in the warm summer air, with numerous flying insects drawn to our night lamps. In this poem, Hardy observes that such simple creatures appear to know ‘Earth’s secrets’ – secrets of which, as in Hardy’s more famous poem ‘The Darkling Thrush’ – the poet himself is unaware. Look out for the dialect word ‘dumbledore’ in this poem – an old term for the bumblebee.’

Another lovely August poem for sure must be Sara Teasdale’s ‘August Moonrise’.

‘Teasdale (1884-1933) was an American poet whose lyrics about the natural world, and particularly the natural world of the United States, are well worth reading. Adopting a Romantic view of nature, Teasdale, aware that one day she will die, considers herself lucky to have witnessed the moon rising over the Connecticut hills’: 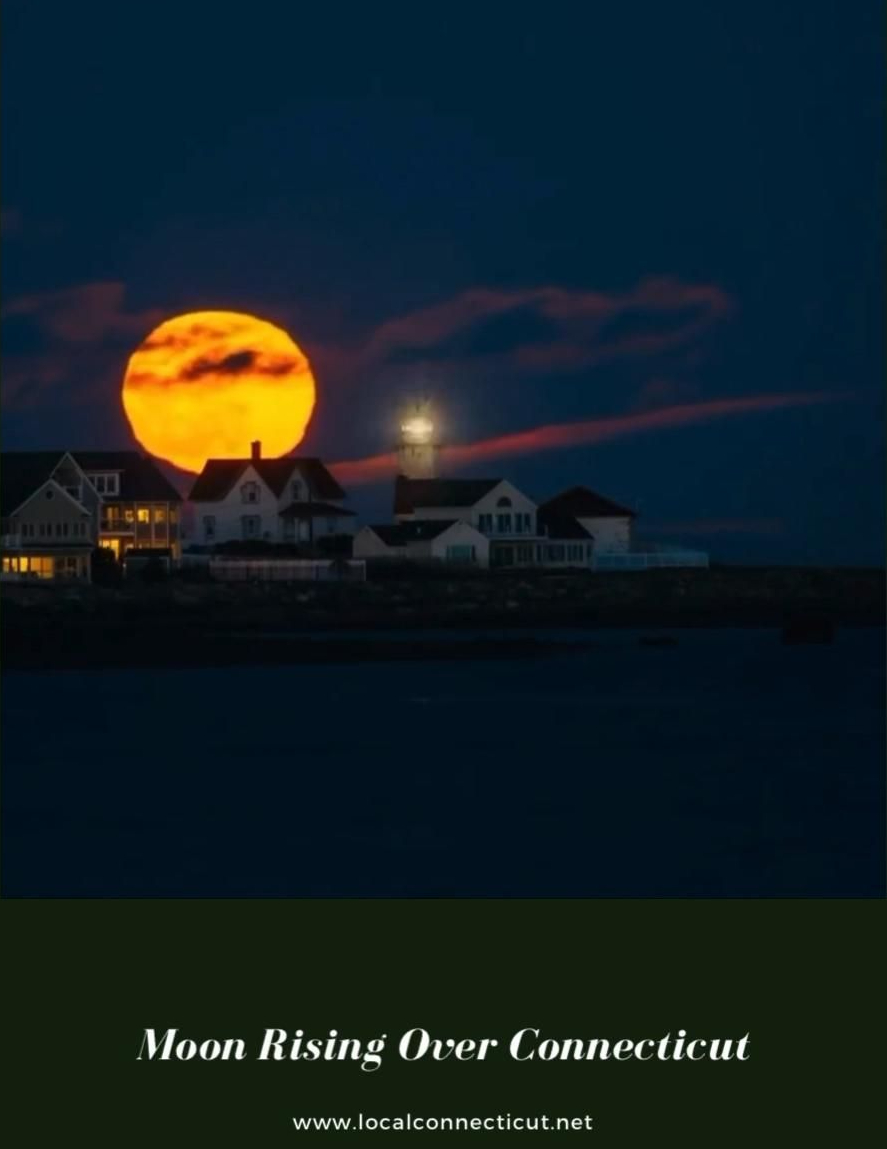 ‘THE sun was gone, and the moon was coming

Over the blue Connecticut hills;

The west was rosy, the east was flushed,

And over my head the swallows rushed

This way and that, with changeful wills.

Now together and now apart

The maples stamped against the west

Were black and stately and full of rest,

And the hazy orange moon grew up

And slowly changed to yellow gold

While the hills were darkened, fold on fold

To a deeper blue than a flower could hold.

Down the hill I went, and then

I forgot the ways of men,

For night-scents, heady, and damp and cool

Wakened ecstasy in me

On the brink of a shining pool. 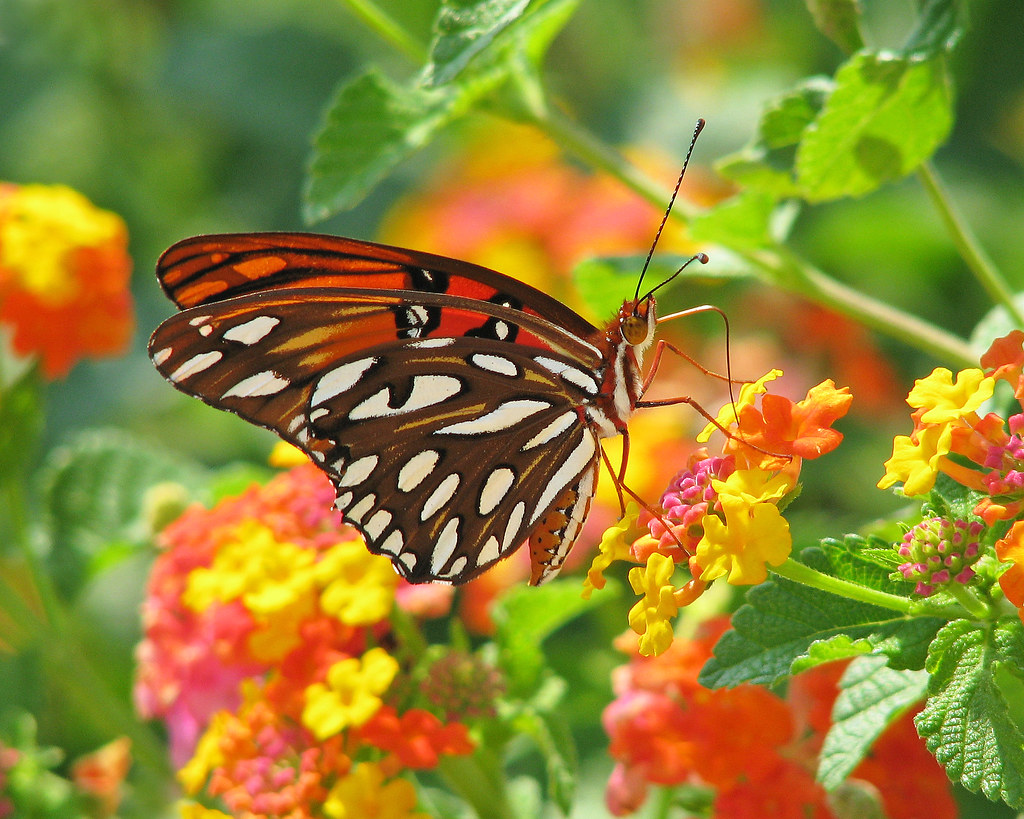 ‘When August days are hot an’ dry,

When burning copper is the sky,

I ‘d rather fish than feast or fly

In airy realms serene and high.

I ‘d take a suit not made for looks,

Some flies, some lines, some bait, some hooks,

Then would I seek the bays and brooks.

I would eschew mine every task,

In Nature’s smiles my soul should bask,

And I methinks no more could ask,

In case of accident, you know,

Or should the wind come on to blow,

Or I be chilled or capsized, so,

A flask would be the only go.

Then could I spend a happy time,—

A bit of sport, a bit of rhyme

To make my bottle’s contents prime).

When August days are hot an’ dry,

And go ahead, and fish, and lie!’- This poem appears in the following book(s): Lyrics of the Hearthside

Finally, whatever your thoughts are on August, endless summer, or the feel of autumn chill, let us enjoy these lovely poems and have a wonderful August whilst singing the joys of summer, sunshine and the blue skies.

A Selection of Related postings from our archive

Do we love the world enough to look after it, to save it?

My poem of the Month: Springing back in April with a Renewed Sense of Hope and Optimism

My Poem of the Month: A Celebration of this Sweet and Merry Month of May